Celebrating Culture and Diversity at the 2018 Fall Fiesta

Residents milled around the Main Lounge at I-House, many in traditional clothes from their countries. The smell of cheese and other hors d’oeuvres wafted through the air, and the Lounge was awash with color and conversation. On Friday, November 2, 2018, I-House’s Fall Fiesta had come around again. 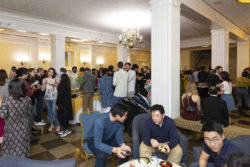 “Fall Fiesta is one of I-House’s main events. The idea behind it is to celebrate the diversity and cultures in the House,” said Anca Agachi,  an I-House Programs Fellow and one of the event organizers. At the annual Fall Fiesta, I-House Residents showcase their cultures by performing music, dance and poetry on the grand stage of Davis Hall. Residents and audience members are encouraged to attend the event in their respective country’s traditional dress, adding life and color to the event.

Savang Gupta and Rohan Singh, both from India, came dressed in Kurtas. Their friend, Vivienne Yang, from Taiwan, said that while she hangs out with them all the time at Columbia, it was her first time seeing them in Kurtas: a look she considered striking. Gupta was attending Fall Fiesta for the first time and was excited to see the cultural performances that night. “Apart from our culture, all others are new,” said Singh, also looking forward to the events of the night.

Not all attendees dressed up, but there were plenty of opportunities to share about their different cultures. Eri Matsuda, an NYU student from Japan, stated that she didn’t bring a kimono with her when she traveled to the States. “I don’t know how to wear the Kimono,” she said, adding that there are even classes to teach people how to wear one. Kimonos are very expensive too, she noted, sometimes costing more than $500 dollars, making the Yukata, a lighter and cheaper summer kimono, a more likely pick for less formal occasions.

At the end of the hour, the reception ended, and residents filed into Davis Hall, chatting excitedly amongst themselves. The night’s performance had begun. 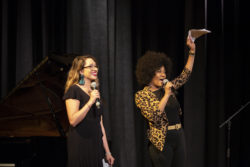 “Whose first time is it at the Fall Fiesta?” asked the event’s MC, Kiah Johnson, from a mic at the podium. The crowd hollered back enthusiastically. The stage was lit, and all other lights in the Hall dimmed. Behind the podium hung large blue drapes with brownish-gold finishings.

Alvaro Mateo opened with a lively performance of the well-known Cuban song “Guantanamera,” getting residents to sing along. 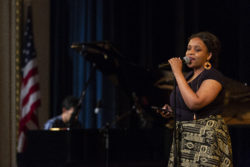 The Hall then fell silent as Lebogang Mahlare went into a soft and enchanting South African rendition of “Summertime.” The audience clung onto every word she sang, and at different points throughout the song, she’d pause ever so briefly, hold the mic closer to her, and breathe into it in a way that echoed the light tide of an ocean.

“Lebo and her rendition of ‘Summertime’ is something you don’t see often,” said Yun Yang, an I-House Roundtable Fellow. “She brings her culture into the song, so it adds this color that you wouldn’t find elsewhere.” 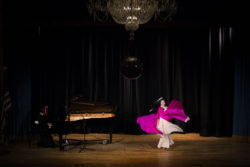 “Butterfly Lovers” is a Chinese legend about star-crossed lovers. “It’s like a Chinese version of Romeo and Juliet,” said Lin. The idea behind the performance was to do a fusion of Western classical music and Eastern dance, added Liu, who did the piano arrangement.

Benny Chen also performed two Chinese love songs, both with mellow tunes. “He was singing about how he doesn’t regret having loved the person he has now lost,” said Kevin Wang, a Chinese-American from Massachusetts. 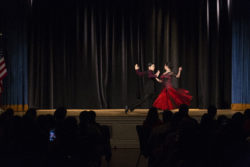 Then, stunning the hall into silence, Kevin Shi and Serena Luo did a seductive tango performance. Shi, dressed in a tuxedo, and Luo, in a blue and black laced dress, moved effortlessly across the stage, eliciting oohs and aahs from the audience.

Said Shi, “This might be my last time dancing for a year or two because my partner is leaving,” referring to Luo, who is moving to Boston, “so I decided to do a showcase.”

“It was perfectly coordinated,” said Asha Jain, India, of the dance.

Some other performances that followed were: “Titanium” by Sudeshna Mahata and Ankita Bhardwaj, a piano medley by Manuel Gimferrer, a classical Bollywood song by Girish Krishnamurthy, “Can I Have This Dance?” by Arunima Sharma, and a rendition of the German classic “Mack the Knife” by Nisha Ha and Davide Szep. 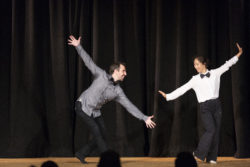 In one of the final performances, four residents, paired in twos, did a slow and sensual Bachata dance that drew gasps from the audience. One of the dancers, Irina Maya, of Lithuania, said that she got inspired to perform for Fall Fiesta while taking Bachata classes at I-House. She and the other dancers had practiced until 2am the night before, she said.

Serenading the audience, Samar Niaz of Pakistan played his guitar and sang “Castle on the Hill” by English singer-songwriter Ed Sheeran; he then switched up the tempo to a Backstreet Boys classic, “I Want It That Way.” The crowd joined in, lighting up their cell phones and waving them in the air.

Ending the night on a high, a team of Indian residents did a lively Bollywood dance performance.

“The idea behind the dance is less about choreography and more about filling the room with energy,” said Niharika Mehta, a member of the dance team. Ayush Goyal, who coordinated the dance, agreed. “More than dance moves, it’s about energy and expression,” said Goyal. “Bollywood dance songs are often very lyrical in nature, and you have to express what the words of the song convey through your dance.”

The audience cheered heartily as the performance came to an end. It was not the end of the night, though. Soon after the curtains closed, Davis Hall was bathed in disco lights, and residents danced the night away at the after-party.

Caroline Kimeu is a Kenyan graduate student at Columbia Journalism School. Before arriving at I-House, she clerked at the International Court of Justice in the Hague, and trained with Shearman & Sterling in Paris. She graduated from Harvard Law (LL.M) and Kenyatta University (LL.B). Follow Caroline on Instagram @caroline__kimeu/.