A COVID Story: Recent Resident Reflects on His I-House Experience 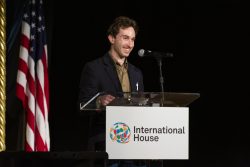 I’d been privileged to call I-House my home since the Summer of 2018, when I started in the Hood Visual Science Lab at Columbia. At first I thought I might move out that Fall to an apartment in the surrounding area, but I realized that wasn’t meant to be as I was swiftly taken into the fold. After only a few weeks of engaging with I-House’s unique and vibrant collection of wunderkinder, I knew I had to stay. Luckily that worked out for nearly two years, during which time I enjoyed the benefit of intense interpersonal connection, growth, and global education only attainable through being embedded in one of the world’s most diverse and intentional living/learning communities. I’d never met another resident who didn’t have both a captivating personal story and a genuine intellectual passion. And this environment opens people up in ways I’ve never seen. In a city where time is money, I-House residents routinely have hours for each other, just to learn about one another.

Connections here are often made quickly and felt deeply. My time at I-House overlapped with that of a fellow Resident, András, for only three months, but last summer I had the pleasure of being a guest at his wedding in Budapest, Hungary, his home. While I was in Europe I took the opportunity to wander for two weeks, only spending one night in a hostel and staying the rest of my time with friends I’d made at I-House. Something about this place truly is magic.

This Spring, as “SARS-CoV-2” began to spread across the world, I remember not initially feeling intimidated. The narrative circulated by the media I was exposed to, and which echoed amid my friends and colleagues, framed the virus as similar to a cold or mild flu. I and many of my friends believed the situation to be not seriously dangerous for most people, especially the young and healthy population a large portion of I-House residents can count themselves among. Even as the first cases of COVID-19 were detected in New York and precautionary measures and messaging became more pronounced across the House, I didn’t anticipate life would change nearly so suddenly or dramatically as it did when we were jarred into recognizing the true potential risks posed by the new disease to our personal and public health.

In March 2020, as the I-House community processed devastating losses, my friends abruptly dispersed across the world, many unsure when or if they might return, graduate, resume studies, have a job, etc. The sudden closure of the South Building elicited powerful and complex reactions. It was incredibly sad and disorienting to say goodbye with such haste, but I understood that in the face of the pandemic, the vibrant communal living arrangement I’d fallen in love with presented a public health nightmare.

At the time, I remember feeling alarmed by the abruptness with which the closure decision was communicated and concerned for my friends from abroad. I was lucky to have the option to return to my family in Texas without concern for closed borders, possible visa complications etc.; the choices and obstacles confronting a large proportion of my fellow residents were decidedly more distressing. But my concern was tempered by knowledge that the International House Board and administration were working under enormous pressure with rapidly changing information. I knew the decision couldn’t have come easily, and I was glad to see the initial communication followed by additional information concerning alternative housing resources and the offer of financial assistance for moving costs.

Approached one day outside the House’s Claremont entrance, I tried to walk a reporter through the developments and associated emotions, but the resulting piece presented my comments edited to convey only a definitively one-dimensional sort of exasperated frustration that wasn’t true to my sentiments, and that wasn’t fair to the complexity of the situation. The story I’d have had told would have centered on the grief of a vital community as it grappled with the shock of adjournment from what was for many of us a life untouchable by peers without our gates.

In this time of sadness, crisis, and vast uncertainty, I am grateful, though, for the compassion and tenacity shown by so many around me. I’m thankful for the I-House building staff who continued commuting to work after the virus hit, often traveling on public transit through infection hot spots to ensure essential services such as dining, cleaning, and security, weren’t interrupted. I know a Public Safety officer, who, even after cases had been confirmed in the building, volunteered to move in temporarily to make sure residents could call on him 24 hours a day. And when I left I-House, I saw my deposit, room fees and some financial assistance for moving expenses credited to my bank account within a few days.

I admire the commitment and hard work put forth by the Admissions and Bursar staff who I know worked tirelessly through nights and weekends to process resident departures and finances. And the powerful mobilization of the International House Alumni network those past weeks and months has been beyond awe-inspiring. I’ve received more personal messages recently from Alumni than I’ve even yet been able to answer–thank you. That so many members of the I-House community would passionately donate their time and resources to provide financial assistance, negotiate deals with NYC landlords, and just to be there as unwavering support for the current residents, speaks volumes to the depth of meaning possible to find in time spent at International House. 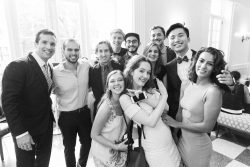 It hurts me now to have had to leave my home and so many dear friends, but I’m thankful for my parents who’ve welcomed me as a temporary roommate (after quarantine!), and for my companions across the world on whom I can still always count to patiently answer my eccentric messages and FaceTime calls. Not all reunions will prove easy, but I draw strength from knowing we’ll see them through. As I reflect, and look forward, I’m honored to belong to a community that garners such vigor from its own diversity, whose members, different by heritage, nationality, religion, language, and myriad more, are compelled to remarkable lengths to help and protect one another in the face of calamity. I believe the persistent dedication and fortitude shown recently by all the extended I-House family stands clear testament to a spirit of solidarity grown unbreakable over a century.

A postgraduate researcher studying Visual Neuroscience at Columbia University, William “Eugene” McKee served on the Resident Support Services team and attended nearly every event at I-House during his residency.