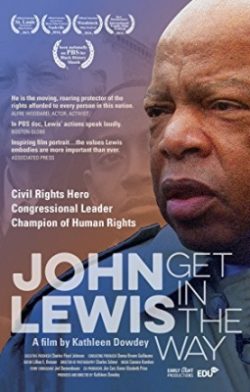 John Lewis: Get in the Way is the first major documentary biography of John Lewis, civil rights hero, congressional leader and champion of human rights whose unwavering fight for justice spans the past 50 years. Get in the Way takes audiences on the journey of a man who fights for social justice using a radical tool: nonviolent direct action. Born into an era of profound social change, the son of sharecroppers in the Jim Crow South, Lewis made choices early in his life that propelled him to a vital role in U.S. history. He was often at the center of crucial events in the Civil Rights Movement, a leader on the ground and at the front lines of some of the most chilling confrontations.

Through never-before-seen interviews shot over 20 years, filmmaker Kathleen Dowdey shapes a gripping and intimate tale of personal voice and revelatory moments. Once an activist pushing from the outside, Lewis’ career as a congressman has solidified his stature as a strategically agile activist making noise on the inside. Here is a riveting portrait of Lewis’ journey of courage, searing disappointments and hard-won triumphs as over the decades he inspires others to stand up and get in the way.

The screening is followed by an engaging discussion with the award-winning filmmaker, Kathleen Dowdey moderated by Sharon La Cruise, Vice President of Admissions, Programs & Resident Life (International House) and a Q&A session with the audience.

*Trailer: “John Lewis: Get in the Way”

Hosted By
Date(s)
Location
Stay up to date on International House News, Media & Events
Sign Up