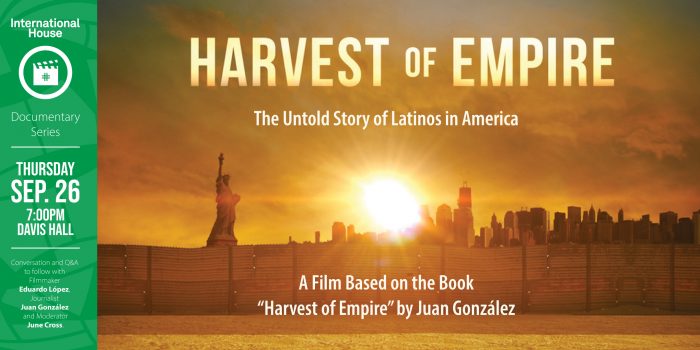 “We are all Americans of the New World, and our most dangerous enemies are not each other, but the great wall of ignorance between us”
– Juan González, Harvest of Empire

A powerful documentary that examines the direct connection between the long history of U.S. intervention in Latin America and the immigration crisis we face today. Based on the groundbreaking book by award-winning journalist Juan Gonzalez.

Directed by Eduardo López and Peter Getzels, the film offers a powerful glimpse into the enormous sacrifices and rarely noted triumphs of the millions of Latino immigrants who are transforming America’s cultural, economic and political landscape. Harvest of Empire features extensive interviews with and commentary by journalist Geraldo Rivera, Pulitzer-prize winning writer Junot Diaz, the Reverend Jesse Jackson, Nobel Peace-Prize winner Rigoberta Menchú, GRAMMY-winner Luis Enrique, and many others.

Hosted By
Date(s)
Stay up to date on International House News, Media & Events
Sign Up