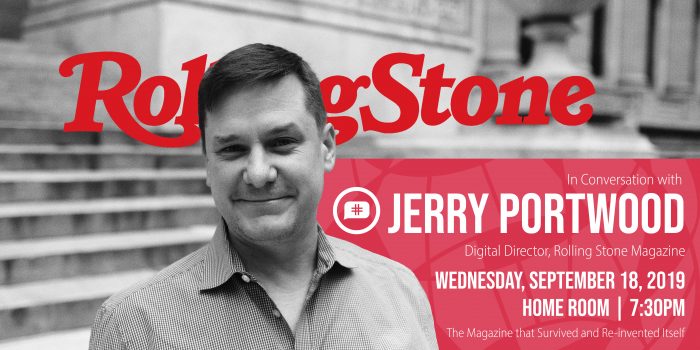 More than 50 years after its launch, Rolling Stone magazine continues to be the preeminent voice on music, culture and politics. How has the magazine managed to survive and re-invent itself when so many others have gone out of business?

Join us for a fascinating conversation with Jerry Portwood and Sharon La Cruise, VP of Admissions, Programs & Resident Life, I-House.

Jerry Portwood is a writer, editor and journalist. He is currently the Editorial Director of RollingStone.com, and was previously the Executive Editor of Out magazine. He began at Out the day after same-sex marriage became legal in New York State in July 2011. Portwood covered the evolving politics and personal stories until the summer of 2015 when the landmark Supreme Court case made it legal across the U.S. Prior to that, Portwood was the Editor in Chief of the New York Press, and was the founding editor of CityArts, an arts publication he launched in 2009.

For nearly 20 years, Portwood has worked and contributed to a variety of publications, including The New York Times, The Advocate, Back Stage, and the Atlanta Journal Constitution. He also teaches a course, Writing About the Arts, at the Eugene Lang College of Liberal Arts at The New School. Portwood has also hosted live interview sessions at Lollapalooza and Austin City Limits that included Grammy winners Dua Lipa and Brandi Carlile. Additionally he has interviewed playwright and MacArthur Fellow Taylor Mac during the Montclair Film Festival. Portwood attended Oglethorpe University in Atlanta, Georgia and lived for two years in Barcelona, assisting with Clemson University’s architecture program based in Spain.

Hosted By
Date(s)
Stay up to date on International House News, Media & Events
Sign Up