Indigenous Peoples in the Archives 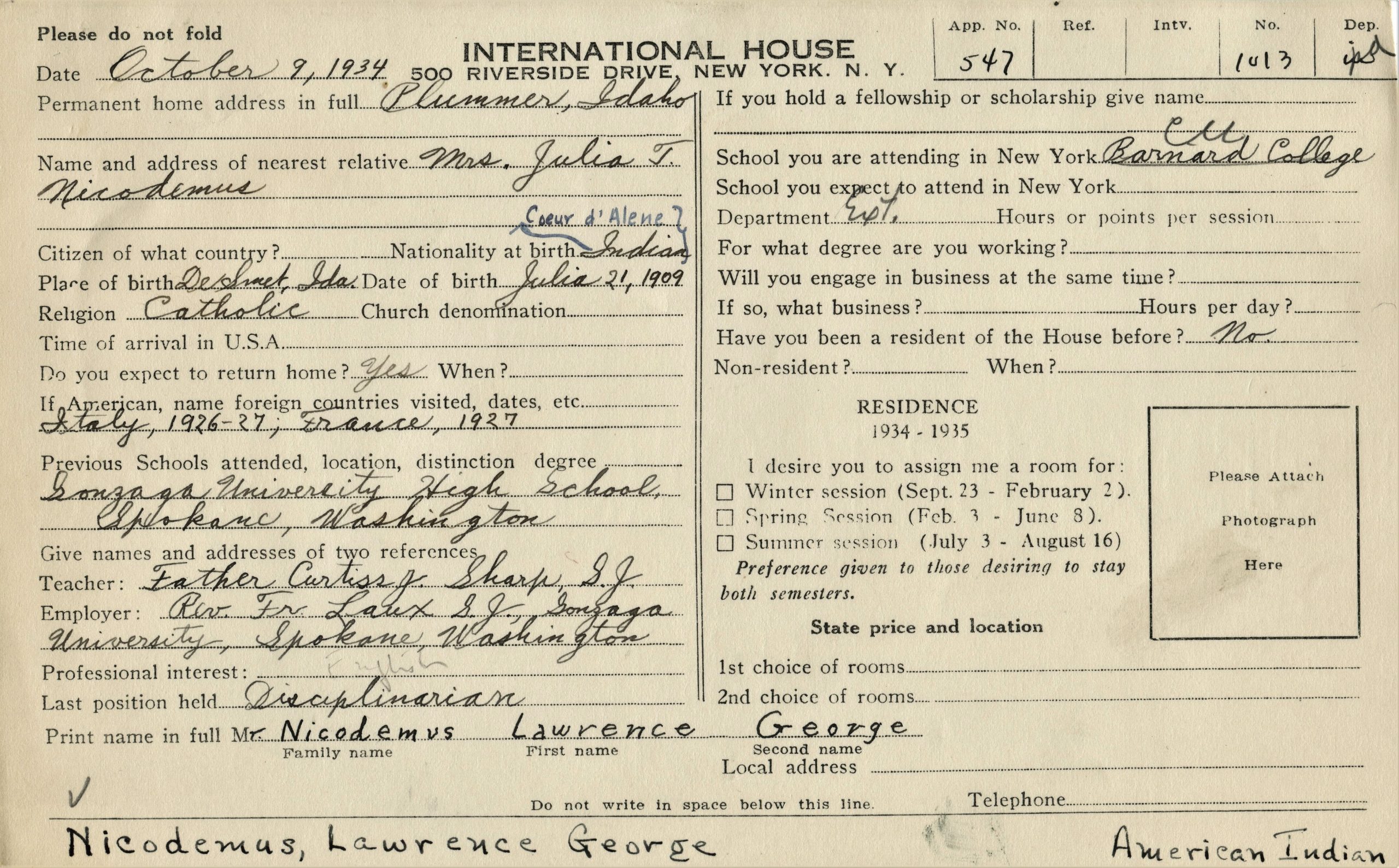 Founded in 1924, International House has an established legacy of bringing together students to share experiences and life lessons. Our mission is to enable selected university students, fellows, faculty, and interns from countries around the world and the United States to live and learn together in a challenging and supportive community in New York City. For the last 96 years, International House has had the pleasure to be the home to many individuals of various backgrounds, including American and global Indigenous Peoples.

With over 5,000 different groups, in 90 countries worldwide, the Indigenous are a distinct population of people that comprise 6.2% of the world’s population. Indigenous communities often feature unique languages, distinct sets of cultural practices, and a deep connection to the natural world. While incredibly diverse, Indigenous Peoples share the common experience of being “discovered” and subjected to colonial expansionism. The most basic human rights of Indigenous Peoples are frequently disregarded, and they continue to be subjected to policies designed to dispossess them of their land and resources. The impacts of such practices have resulted in an incalculable loss of lives and the destruction of unique cultures. Today, Indigenous Peoples are statistically more likely to experience poverty, infant mortality, unemployment, and substance abuse. Despite their long history of struggle, Indigenous Peoples worldwide continue to celebrate and honor their heritage, exhibiting strength, resilience, and dignity. In honor of Indigenous Peoples’ Day, International House celebrates Indigenous People worldwide by looking into the Archives, to highlight the voices of our many Indigenous residents that we have welcomed over the years. 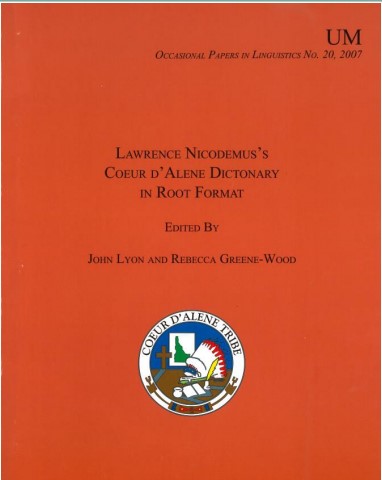 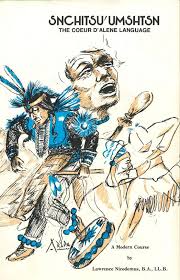 Lawrence Nicodemus (’35), a member of the Coeur d’Alene Tribe was born in 1912 grew up in Northern Idaho, speaking Snchitsu’umshtsn, a Salishan language characterized by agglutinativity and syllabic consonants. Nicodemus lived at I-House while working with Columbia University linguist Gladys Reichard. Together, he and Reichard recorded numerous phonographs and developed a grammar, dictionary, and writing system for Snchitsu’umshtsn, a traditionally oral language. In the 1935 I-House directory, Nicodemus said,

“I find living in the House not only gives me contact with people from other lands…but it helps me to form my own ideas through listening to the conversations of other Americans.”

A lifelong teacher and student, Nicodemus went on to earn degrees in law and music and served on his tribal council and acted as a tribal judge. He devoted the rest of his life to teaching and preserving the Coeur d’Alene culture and language. When he died in 2004, Nicodemus was only one of five known people to speak Snchitsu’umshtsn fluently, but because of the work he did in his lifetime, this language still exists. 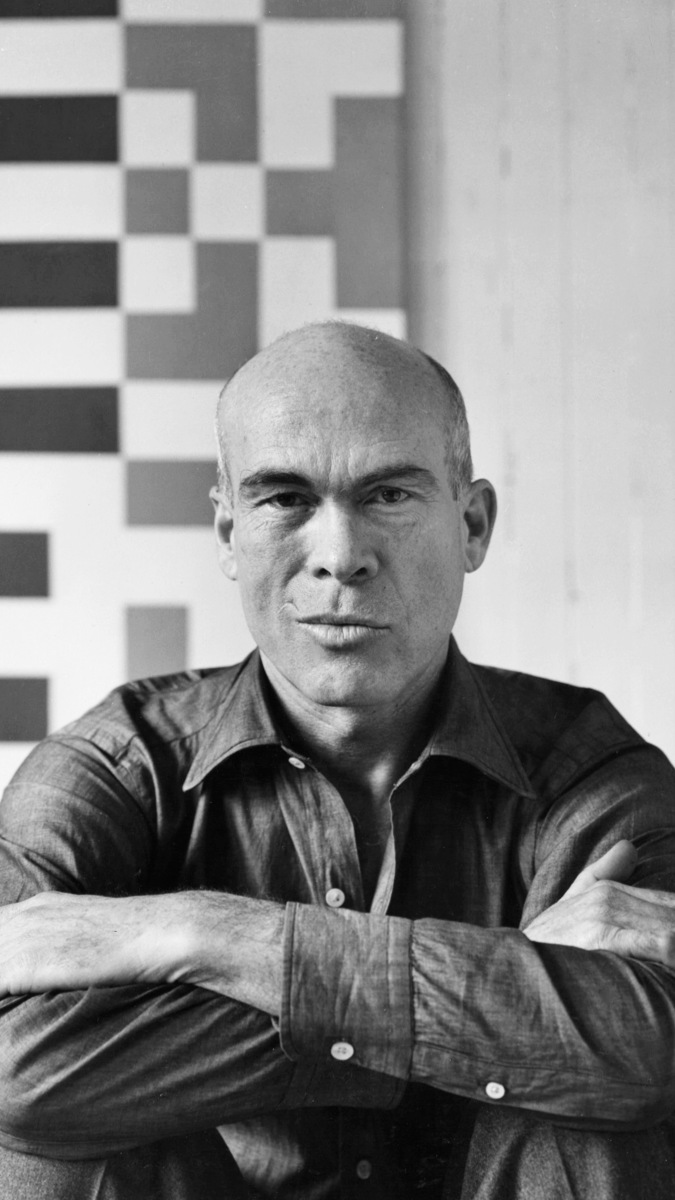 The 20th Century Abstract Artist and Cherokee Indian, Leon Polk Smith (’36-38), also lived at I-House. Now considered one of the most influential artists of his time, Polk Smith is renowned for establishing a hard-edge style of minimalist art with signature geometric abstract shapes. On May 20, 1906, he was born to parents who were each one-half Cherokee in Indian Territory one year before the land became Oklahoma. He was the eighth of nine children and grew up in a largely agrarian community speaking English and Cherokee. After graduating from Oklahoma State College, Polk Smith spent three summers living at I-House while earning his Master’s degree in Art Education at Columbia’s Teachers College in 1938. Growing up in an era marked by racism, Polk Smith credits his early experiences learning the Chickasaw and Cherokee Indians’ language and ways as important influences on his life and art. He believed that indigenous background instilled in him a deep understanding of communal living, which he applied to his work and his commitment to equality and civil rights. 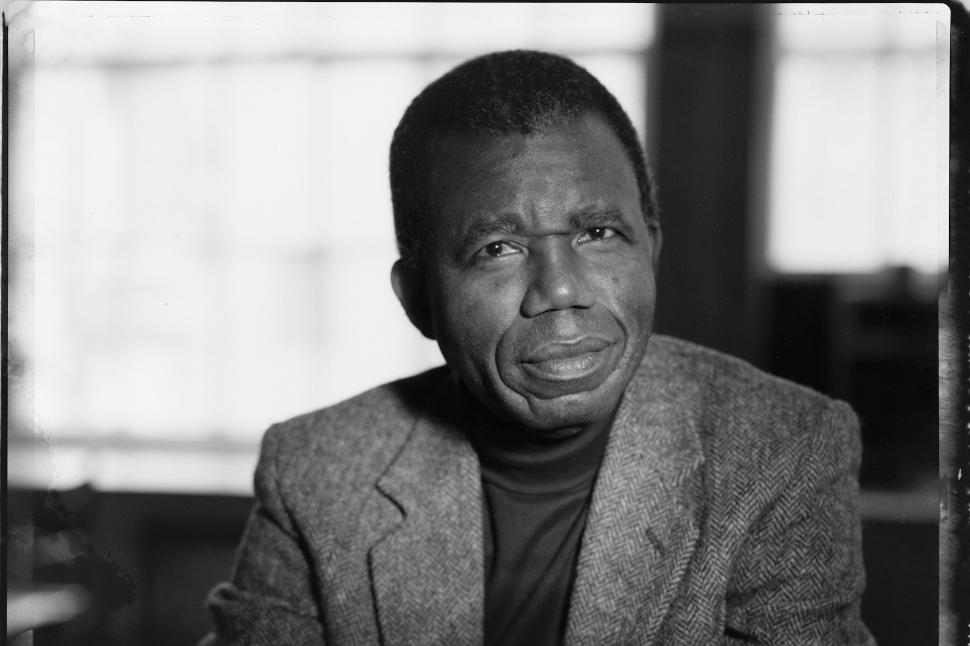 In addition to American Indians, I-House has also accepted Indigenous Peoples from all over the world. Notable author Chinua Achebe (’63) stayed at I-House after he served as a UNESCO fellow in the Creative Arts. He was born the fifth of six children on November 15, 1930, in Ogidi in Eastern Nigeria. His family belonged to the Igbo tribe until representatives of the British government-controlled Nigeria convinced his parents to abandon their religion and follow Christianity. Inspired by his early experiences, Achebe’s most celebrated work, Things Fall Apart, 1958, recounts the story of a traditional warrior hero who cannot adapt to changing conditions in the early days of British rule. Translated into more than fifty languages, Achebe’s novel effectively portrays the devastating impacts of European Imperialism to readers around the world. Following his time at I-House, Achebe became a vocal social critic and political activist. He traveled to different countries discussing his people’s struggles, especially the starving and slaughtering of Igbo children. He dedicated the remainder of his life to advocacy, writing, and teaching.

I-House continues to welcome all Indigenous Peoples and provide an open community for individuals of all backgrounds to build peace and facilitate understanding. Franklyn Tranquilino Telles, a current resident and public-school science teacher of Apache heritage, has lived at I-House with his wife and children for almost three years. Telles first learned about I-House through his graduate program at the American Museum of Natural History. While his mother grew up in El Salvador, his father was born in 1915 in the New Mexican Chihene Nde Nation, a band of Chiricahua Apaches. Growing up in California, Telles remembers attending Pow Wows with his father and listening to him speak the language. After losing his dad at the age of 12, Telles reconnected with his Indigenous birthright 20 years ago after contacting the Chiricahua Apache Nation. Working with the tribe, Telles could trace his roots and learn about his father’s culture. Currently, the Chiricahua Nation is attempting to gain re-recognition as a federally recognized American Indian Tribe. In the future, Telles hopes to teach his young daughters about their Apache heritage and visit New Mexico and El Salvador.

International House and the Archives recognizes the important contributions of Indigenous Peoples. We are proud to celebrate the unique achievements of our Indigenous residents and we look forward to continuing to share these important stories.