On March 29, 2019, International House held its first overseas Gala in Shanghai, China. The event brought together Alumni, Trustees, and friends from the Asia region and around the world to celebrate the organization’s 96-year history of preparing the next generation of global leaders. The evening also served to highlight the importance of China to the history of International House.

Shanghai was chosen in recognition of China’s emergence on the international stage and the growing population of Chinese Residents and Alumni in the International House community. Today, Chinese Residents comprise approximately 15% of the 700 students and scholars from throughout the world who live at the historic non-profit residence and program center in New York City. 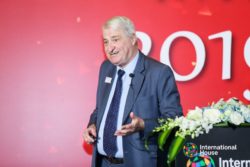 As fitting for International House’s mission of cross-cultural understanding, guests came to the Jing An Shangri-La Hotel from Asia, the U.S., the U.K., Qatar, Australia, Germany and beyond. The evening’s program included a formal keynote discussion with I-House Alumnus Dr. Georges Haour ‘69, Professor of Technology and Innovation Management at the Swiss executive education institute IMD and author of Created in China: How China Is Becoming a Global Innovator. Also speaking were Peter O’Neill, Chair of the International House Board’s Executive Committee, and Calvin Sims, President and CEO of International House. 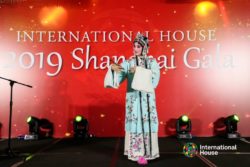 Performances by international GuQing artist Xinjiang Ping and the Kun Opera rounded out the evening’s entertainment. The festivities continued beyond the event, with excursions organized by International House in Hangzhou, Suzhou and Beijing in the days following.

Gala attendees gave special thanks to John Pek ‘68, I-House International Trustee who co-chaired the event along with International House Trustees Bei Ling and Yuqiang Xiao. The event raised a record $130k, surpassing expectations. A second gala in Asia is being planned, to be held in India in 2020.