The first time I saw her outside of International House, she was flitting off to a Venezuelan film festival downtown. On LinkedIn, she is endorsed for assistant directing, camera operation and Final Cut Pro more times than most people are endorsed for Microsoft Office. Her resume is ironclad with experience after experience backing up her expertise as a producer of documentaries, live television and short films. Chances are that if you’ve been to an International House event, you’ve been to an event that she’s supported as a media technician.

If there were ever a person who had that “pedal to the metal” mentality, I would say it was Luz. But while Luz’s tunnel vision seems a simple combination of self-discipline, pragmatism and several cups of coffee, her story is much more complex, and perhaps all the more inspiring.

Luz came from a lower-to-middle-class family in Venezuela. The country was experiencing challenges due to mismanagement of the economy, and the situation was getting worse, she says. “I was part of the generation that had to leave the country to look for tools, resources, points of view, and experiences — a toolbox to help rebuild our country in the recovery period,” she says, referring to the mass exodus of one million young, educated Venezuelans, or as NPR called it, Venezuela’s “brain drain.” She decided to pursue a master’s in media management and a master’s certificate in documentaries at the New School in downtown Manhattan, but the money wasn’t there. “You can’t legally buy dollars in Venezuela and even the black market is too expensive,” she says. Luz calculates the exchange rate on her phone: close to 3,000 bolívares to a U.S. dollar. “It would be impossible to even buy a coffee here.”

But Luz caught a break: the New School would grant her the maximum scholarship, paying half of her tuition and allow her to do a work study to cover some of the remainder. She studied for a while, worked as a teaching assistant and as an in-house production assistant, and even applied for loans. Everything seemed fine, until she received a call to come home — her father was sick. “Usually when you take a leave of absence, [the institution] takes away your scholarship, but the New School was amazing — they knew me as a student, understood my circumstances and let me keep the scholarship for when I would come back.”

But as fate would have it, things at home would get much worse, and with her father’s passing, Luz would have to deal with another hardship — the painful reality that the time she took off from school to help her family at home also meant she wasn’t working and making enough money to return in the fall. Unable to pay a deposit for another place in the city, Luz recalled that a friend of hers had mentioned International House. “Other places required deposits, and months in advance,” she says, “but the possibility of financial aid at International House meant that maybe I could come back to New York City to finish my studies.”

The day Luz was awarded financial aid to live at International House, a Venezuelan filmmaker had been visiting and the two celebrated. “It was like, in the middle of the darkness of what Venezuela was experiencing right now, this was the light at the end of the tunnel telling me that I had to keep going.”

As we sit, the lights from the chandeliers in the International House’s Main Lounge shimmer and a light breeze grazes the French doors to the garden. “Even so, you don’t disconnect from home,” she says, hushed. “The situation there is still bad — we have hyperinflation of around 500%, people are lining up for food and there’s no medicines, not even basic medicines.” It’s a tradition among young Venezuelans abroad to send care packages to their families through whichever friends are traveling back to the country. “I ask my mother, what can you not find there, and then I prepare a package — not to heavy — to send home with a friend,” she says. “Now, I’m traveling for Christmas and a friend asked me if I could bring some foods home, and I say ‘of course,’ but sometimes even when you pass customs in Venezuela, they steal your food, because everyone is in the same situation of need.” 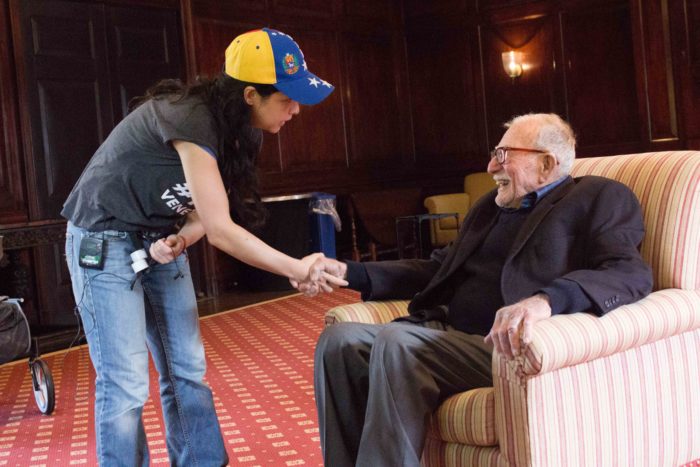 Since being here, Luz has sent soaps, basic medicines and food home, but still struggles knowing her mother frequently waits in line up to six hours at a time to collect food from the food stations. “It’s a mess,” she says, “but here we are sitting in this beautiful room and house from the 1920s… I tell myself, I can’t keep letting myself convert between bolívares and dollars because if I do, I won’t even let myself have a cup of coffee.”

But Luz’s story isn’t one of defeat. “I might have economic and financial needs, but that doesn’t make me weak,” she says. “On the contrary, it has created resilience in me. You are only weak if you see yourself as a weak person.” Just last month, I had been sitting in a coffee shop when she approached me with the announcement that she was running the New York City marathon for charity. “To run is to live,” she says, “it’s a beautiful metaphor — I’ve dealt with my financial struggle like a marathon — when I’m at mile 8, I don’t worry about mile 20, I take it one mile at a time.”

Even so, witnessing the changes in the political climate over last few weeks at I-House has had Luz wondering what life after graduation will be like. She has heard rumors that the administration will get rid of OPTs for international students. She had watched celebrations in Miami over the death of Fidel Castro. And she came to the realization that the place she once called home in Venezuela may no longer exist.

“I spoke to someone from Syria at I-House over what it was like struggling because of the losses of your home, and I thought, ‘all these decisions that the U.S. and these other countries made created this’ — it’s hard to think about how far apart the people who make the decisions and the people who suffer are.”

But Luz still focuses on her work, adapting her tunnel vision every day, so that one day, she may return to her country and perhaps, help it heal.