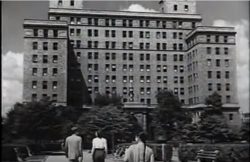 Founded in 1924, the International House has built a rich history of bringing together students from around the world to share experiences and life lessons in peace building and understanding.

I-House was originally conceived by Harry Edmonds, an official with the YMCA, who in 1909 had a chance encounter with a lone graduate student from China. As recounted by Edmonds to the New York Times in 1979,

“One frosty morning I was going up the steps of the Columbia library when I met a Chinese student coming down. I said, ‘Good morning.’ As I passed on, I noticed he stopped. I went back.

“He said, ‘Thank you for speaking to me. I’ve been in New York three weeks and you are the first person who has spoken to me.’

“With my wife’s insistence, I agreed I had to do something.”

That “something” began with Edmonds and his wife, Frances, inviting international students to their home for Sunday Supper.  The lively exchanges inspired Edmonds to create a place for international students to feel at home and create camaraderie with others. Edmonds’ dream was brought to life by the philanthropy of John D. Rockefeller Jr. and the Cleveland H. Dodge family, who funded the construction of the International House building, which since has been designated a New York City landmark.

International House was the first global community of its kind, predating the United Nations by 21 years. For more than 96 years it has transformed the lives of more than 65,000 Alumni, which include not only Nobel Prize winners, heads of state, award-winning authors, singers, actors, and CEOs, but teachers, doctors, small business owners, community leaders and volunteers throughout the world.  We achieve our mission of preparing leaders for the global community by building core values of Respect, Empathy, and Moral Courage through a lived experience that consists of organic encounters and a series of unparalleled programs offered within our Morningside Heights facilities. Additionally, we consistently seek out strategic partnerships to encourage diversity of thought and experience among our Residents.

An independent non-profit organization partnering with many organizations that include Columbia University’s International Students & Scholars Office (ISSO), International House has enjoyed distinguished leadership since its inception. Past Chairs of the Board have included two former U.S. Presidents (Eisenhower and Ford), three former Secretaries of State (Stimson, Marshall, and Kissinger), and a former Chairman of the U.S. Federal Reserve (Volcker).