As part of the I-House Documentary Series, Residents and special guests attended a screening on October 17, 2019, of “Brave Girl Rising,” a powerful, short film about courage and transformation that tells the story of Nasro, a 17-year-old Somali girl growing up in one of the largest refugee camps in the world. 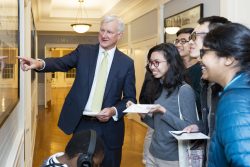 The evening began with a light cocktail reception in the Hall of History, where attendees spent the time connecting and enjoying the delicious food and beverages before being ushered into Davis Hall.

Officiating the event was William Dodge Rueckert, who has been a Trustee of International House for 35 years, since 1984. He is also a former Chairman of the Executive Committee and a descendant of Cleveland H. Dodge, one of the original founders of International House. Rueckert opened his speech by sharing his experience talking with some I-House Residents during the reception. “What’s the best part about I-House?” he had asked, to which one of the Residents answered, “The best part of I-House is the people.” Rueckert said he personally resonated with that statement, and reminisced about the years and wonderful memories he had here at I-House.

Rueckert then introduced the special guest of the night, Christina Lowery, the CEO of Girl Rising, a nonprofit organization whose mission is to change the way the world values girls and invests in their potential. Lowery shared her experience working on girls’ access to education, which began 11 years ago, while she was working with a media production company in NYC. Her storytelling model centers on telling real stories about real girls who are facing challenges in their life with resilience and courage. She had worked with many projects, including the “Let Girls Learn” initiative with Michelle Obama. Lowery highlighted the fact that there are 130 million girls who are not in school, due to many factors such as structural challenges, insufficient schools and teachers and lack of funding. She further emphasized the refugee crisis, which is one of the worse crisis of our times. While introducing the documentary, she shared that the reason that it is called “Brave Girl Rising” is that when she asked Nasro, the Somalian girl featured in the film, what she would name her story, she replied, “I would name it the “Bravest Girl in the World.”

The screening session began with two short stories, excerpts of the organization’s “Girl Rising” film project, which follows nine girls from Haiti, Nepal, Ethiopia, India, Egypt, Peru, Cambodia, Sierra Lone, and Afghanistan, on their respective journeys to education. Then the screening of “Brave Girl Rising” followed, an inspiring, short film that tells the story of a young girl in a refugee camp, who, despite all odds, succeeds in getting the education she deserves. The three short films were shown consecutively, and as soon as they ended, the audience erupted in applause.

The session continued with a panel discussion moderated by Lowery, who was joined by Sandra Uwiringiyimana and Angela Matusik. Uwiringiyimana is the co-founder and Director of Partnerships and Communications at Jimbere Fund, an organization that aims to revitalize distressed communities in Congo by investing in women, and the author of How Dare the Sun Rise, her story of being born into conflict in the Democratic Republic of Congo (DRC), and moving to New York City in 2007, where she is now finishing her studies. Matusik is Head of Corporate Brand and Storytelling at the technology company HP, and is an experienced digital marketing and content strategy consultant.

“I can relate with the character in the short film, longing for education,” said Uwiringiyimana, who kicked off the panel discussion by sharing her experience growing up in a permanent refugee camp in DRC. She said that growing up, it was normal and expected to have a disrupted school year. She also explained her situation, saying that the people that were placed at the refugee camp were considered undocumented, not refugees. Speaking from experience, she expressed that girls are the most vulnerable in a displaced situation. 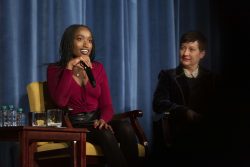 Uwiringiyimana shifted to speak more on corporate storytelling, and how corporations help close the gap when it comes to funding, especially on projects that evolve around girls’ access to education. She believes that climate change is a rich area of focus and that there should be more efforts in addressing the role of women in climate change.

Lowery echoed the sentiment and stated, “The reason to educate girls is to save the planet.” She described how there is a need to bridge the gaps in understanding for public and policy makers, and that all sectors need to work together to create awareness. She suggested that every climate policy should have a pillar in girls’ education.

The three panelists imparted important takeaway messages at the end of the discussion.

“Pay attention to those who are not always being paid attention to. I urge you to look outside your comfort zone and immediate circle, and reach to a world beyond you.” – Sandra Uwiringiyimana

“Know that we can make a difference, so don’t give up the fight.” – Angela Matusik

“We are always “too busy” when we always have time. Figure out on how to give financial support to those who are overlooked with two simple steps: 1. Pay attention, and 2. Go beyond.” – Christina Lowery

Noyonika Roy, a graduate student from India, who is currently studying Chemical Engineering at Columbia University, found the session to be really moving. It was also her first time meeting a refugee in real life, and she said that watching a movie is different than seeing and hearing a person’s story first-hand.

Another graduate student, Ian Mak (Singapore), who is currently studying Political Science at Columbia University, said he enjoyed listening to the different perspectives on the panel, from an inspiring activist to a corporate professional.

Jasmin Irisha Jim Ilham is currently pursuing an MA in Climate and Society at Columbia University. She obtained her BSc. (Hons) Environmental Science from University of Nottingham, Malaysia Campus, and is a youth climate advocate, researcher, communicator, accidental photographer and environmental enthusiast.