On Thursday, May 16, 2019, International House Alumni, Residents, Trustees and friends gathered in the Rainbow Room on the Top of the Rock in New York to honor two distinguished awardees at the 2019 Awards Gala: Khalid Alkhudair, founder of the first Saudi Arabian women recruitment and job support agency, Glowork, and Subha Barry, President of Working Mother Media and formerly the Global Head of Diversity at Merrill Lynch.

The evening’s theme was a celebration of strides that have been made in diversity, inclusion, and gender equality. I-House Resident Sisi Liu (China) opened up the program with a performance of classical piano, followed by a traditional Chinese water sleeve dance by fellow Resident Wenxi Lin (China) and a welcome by I-House President and CEO Calvin Sims. Trustees Lauren States and Adam Quinton emceed, speaking of their shared dedication to I-House’s mission and community.

“I’m very honored. I never thought the day would come when I would be traveling thousands of miles for something I started for my sister,” said Alkhudair, who flew in from Saudi Arabia to attend the Gala. 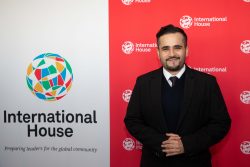 Alkhudair had created Glowork after seeing his sister struggle to find job opportunities after college. Serving at the time as the Chief Operating Officer, Markets at KPMG, Alkhudair was curious about why so many educated, skilled Saudi women faced the same challenge. He interviewed human resource heads in focus groups and found that employers had trouble finding female talent because of segregation laws in the Kingdom. In 2011, he founded Glowork, the first organization dedicated to women recruitment in the Gulf area, using information technology to match Saudi women with jobs and create opportunities in sectors previously inaccessible to women, including work-from-home opportunities.

Alkhudair shared that in 2009, there were about 48,000 women working in the private sector in Saudi Arabia, while today, there are about 870,000. He described how Glowork is part of this larger movement to create a more equal, inclusive, and modern workforce in the Gulf, having placed over 33,000 women so far.

Previously Barry spent over 20 years at Merrill Lynch, transforming a U.S.-centric business into a truly global, diverse one as the Global Head of Diversity. Recognizing the lack of multicultural representation and “changing face of wealth,” she built the Multicultural Business Development Group from the ground up in 2001. Within three years, she had brought in eight billion dollars in new assets and $45 million in revenues across the female, South Asian, Latino/Hispanic, African American, Native American, LGBQT+, and disabled populations. It was a much-needed diversity revolution that was the first of its kind in the brokerage industry. 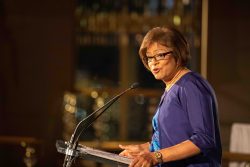 Barry said her inspiration came from the generations of untapped potential in her family, as previous generations of women had not been able to pursue education or employment opportunities because of their gender. Her mother was the first women in her family to attend college.

“I’m so deeply honored and privileged because I came to this city as an international student,” said Barry, who came to the U.S. from India in the early 1980s to attend Rice University. “The experience I-House provides is exactly the experience that international students need,” she said, describing the nurturing environment and programs that help resident members “feel like they can belong” and “see themselves in the best light.” By unleashing global leaders, “we can build a powerful rhythm and beat” to change the world, she said.

After the presentation of the awards, Trustees Kathleen Burns and William Rueckert honored the memory of former I-House President and CEO, Don Cuneo, who passed in 2018. In a short video, I-House Staff recalled Cuneo’s generosity, kindness, and active participation in resident life, calling him not just a great leader, but also a friend. Gala guests observed a moment of silence for Cuneo’s lasting legacy at I-House.

The final event of the program was a celebration of I-House’s Women’s International Leadership program (WIL).  Since the formation of this fellowship and leadership training program in 1990, WIL has prepared more than 500 diverse women for leadership roles in business, government, and civil society. 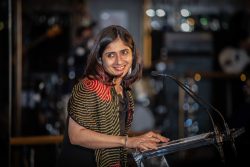 States, who advises the WIL program, returned to the stage to introduce I-House Alumna  and WIL program graduate Arundhati Katju ’17, who was recently named one of Time Magazine‘s 100 Most Influential People in 2019. After graduating from Columbia Law School in 2017, Katju and her partner litigated and won a landmark case to uphold LGBQT+ rights in India, overturning a 157-year-old law  in front of the Indian Supreme Court that criminalized homosexuality.

Katju characterized the program’s impact: “WIL is a group of international women with the skills to think about what the solutions are for tomorrow’s problems.”

She described how WIL provides the three necessary components for modern solutions to modern challenges: Solutions must include women, must include youth, and must be global in nature. Every year, WIL empowers a new cohort of international women Residents to tackle these challenges by cultivating their leadership skills through workshops, seminars, and one-on-one mentorship.

The evening ended on a high note, as guests took to the dance floor and grooved to the exuberant sounds of Moment NYC, an education program dedicated to bringing the rich history and diverse heritage of New York’s music to city schools and beyond.

The I-House 2019 Awards Gala was a celebratory, spirited event that recognized some of the best and brightest global leaders of today. Continuing to serve more than 700 Residents each year, I-House hopes to nurture and inspire the global leaders of tomorrow by building a diverse, inclusive, and lifelong community of dreamers, doers, and change-makers.

Michelle Lee is a graduate student at Columbia University, getting her Masters of Arts in Global Thought, and a Resident member of International House New York. She was a Fulbright Fellow in Malaysia and worked for the White House Office of President Correspondence. She earned her BA in English Language & Literature at the University of Chicago, where she also wrote for the Chicago Maroon and several campus magazines. Michelle currently serves on the I-House Resident Council.

(All photos by Linda Farwell for International House)