Preparing for Peace: The Legacy of Kathryn Davis ’32

Not many know that philanthropist Kathryn Wasserman Davis, the namesake of the prestigious Davis Projects for Peace and I-House’s very own Davis Hall, was once a Resident of International House in New York City. 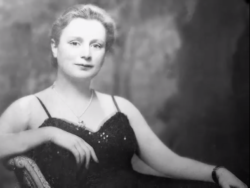 A lifelong scholar and adventurer, Davis was born in Philadelphia in 1907, grew up in Washington, D.C., and received her Bachelor’s degree from Wellesley College, before she moved to New York in 1931 to attend Columbia University for her Master’s degree in International Studies. During that time, Davis and her future husband, Shelby Cullom Davis—the U.S. Ambassador to Switzerland from 1969 to 1975—pursued a courtship at I-House.

Their shared passion for global affairs permeated throughout their lives. Both Davis and her husband, whom she met on a train to Geneva in 1930, moved to Switzerland for their doctorates and became deeply involved in global philanthropy. Davis was a member of the Council on Foreign Relations, Council of American Ambassadors, and New York Stock Exchange, and invested heavily in education, scientific research, planned parenthood, and local communities. She was the recipient of the Woodrow Wilson Award for Public Service and EastWest Institute’s Peace and Conflict Prevention Award in 2006.

Projects for Peace is Kathryn W. Davis’s legacy and call for students to effect change in the world. Founded in 2007 on the occasion of her 100th birthday, the Projects for Peace initiative aims to promote peace and global understanding by challenging students to build peacemaking projects. Students can do so on a local or large scale, work individually or in groups, and tackle any manner of peacemaking, from diversity challenges to cross-cultural learning, so long as they address the root causes of conflict in the world.

Each year, the program awards $1 million to 100 student projects, in the amount of $10,000 each which is channeled through partner colleges and universities. Due to Davis’s special relationship with I-House, a separate 20 projects are selected from Residents of International Houses worldwide, with 10 projects specifically earmarked for Residents of International House New York.

Students are encouraged to think outside the box in designing their projects and may choose to work in any region of the world. Past projects have included work with Palestinian farmers in bee preservation, combatting sexual violence in the Bahamas, and helping a school in Nepal raise chickens for self-sustainability. 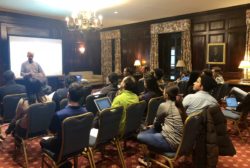 On Tuesday, November 27, I-House’s Associate Director of Programs and Resident Life Cassandra Hamdan and Tom Carley hosted an information session on Projects for Peace for about 30 Residents of I-House. During the session,  2018 project winner Joaquín Tobar presented his work on S-Library in La Libertad, El Salvador. Tobar, who comes from an architecture background, built an open library integrated into the existing landscape to promote peace, cultivate trust in the local community, and address issues of education, public interaction, and violence.

Tobar collaborated with other I-House Residents and local builders to design and construct the outdoor learning space. He also collected book donations for the library. Despite facing some challenges like rainstorms which delayed construction, the project was a great success.

Davis Projects for Peace is now seeking applicants for summer of 2019. I-House resident members in good standing for the 2018–2019 academic year, and alumni who departed during the 2017-2018 academic year and resided for at least 6 months, are eligible to apply. Applications are due to Hamdan and Carley on January 18, 2019.

Michelle Lee is a graduate student at Columbia University, getting her Masters of Arts in Global Thought, and a Resident member of International House New York. She was a Fulbright Fellow in Malaysia and worked for the White House Office of President Correspondence. She earned her BA in English Language & Literature at the University of Chicago, where she also wrote for the Chicago Maroon and several campus magazines. Michelle currently serves on the I-House Resident Council.