Fall Fiesta in the Archives 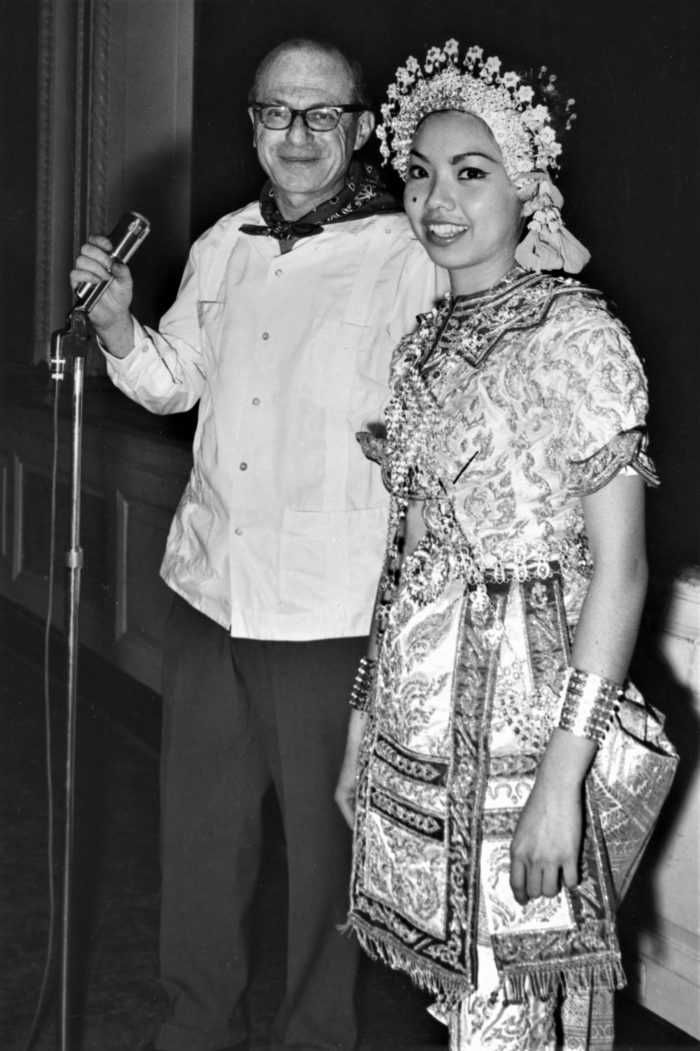 Normally around this time, International House would present Fall Fiesta in Davis Hall, a time-honored tradition we had to suspend this year due to the pandemic. Through performance and dance, Fall Fiesta showcases and celebrates the diverse backgrounds of I-House residents. The event originated with Program Director Herman Rottenberg, affectionately referred to as “HR.” An energetic former businessman, HR devoted his life to promoting cultural understanding and friendship through dance and music. HR debuted Fall Fiesta in the Fall of 1964 with All Nations, a professional folk-dance program/ multiethnic dance troupe. Over the years, the event has evolved into a multi-faceted celebration that encourages its American and International residents to come together, share experiences, and build community.

Folk dancing has always been an essential component of the Fall Fiesta celebration. Folk dance is a unique form of expression that reflects and promotes current or past cultural values. Folk dance can differ wildly across regions and cultures, emphasizing the importance of tradition and norms. Usually associated with social activity, folk dances are often developed by a group of people considered common or every day, created and choreographed collectively and anonymously. Many of these dances are passed down through generations and are deeply rooted in cultural practices that originate from ancient rites, religious ceremonies, and life cycle rituals. At I-House, Residents have performed Tinikling, a traditional folk dance that developed during the Spanish colonial era in the Philippines that involves two bamboo sticks being slid and hit against each other in rhythm; Hula, a storytelling dance originating from the Hawaiian islands by Polynesian settlers that features a complex set of hand movements; and Schuhplattler, a traditional style of folk dance popular in the regions of Bavaria and Southern Germany where performers stomp, clap and strike the soles of their shoes (Schuhe), thighs and knees with their hands held flat (Platt), among many others. Today, folk dancing is performed competitively and is a popular way to promote and celebrate a regional or national identity. 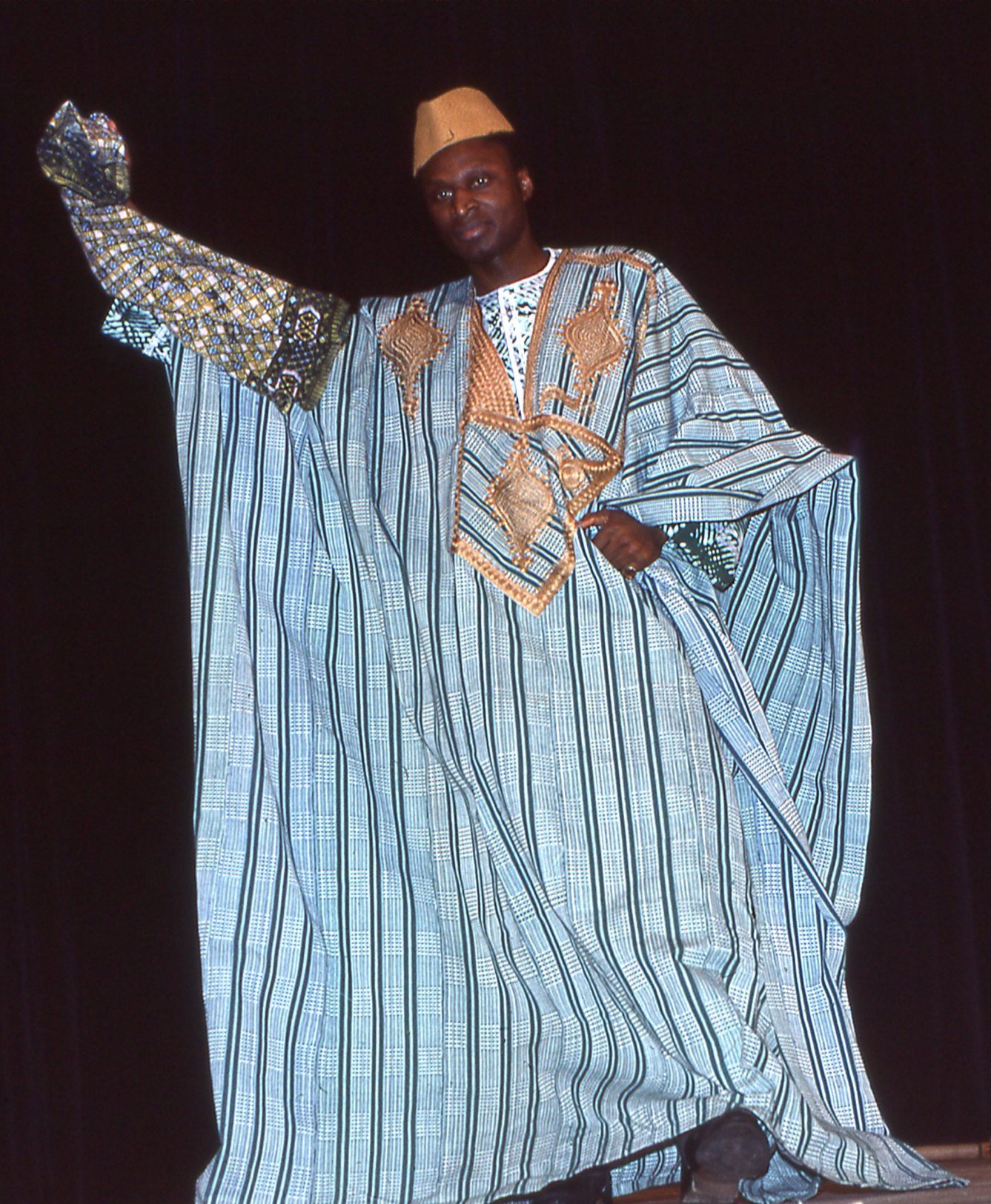 Fall Fiesta also invites Residents to participate in the International Fashion Parade and attend and/or perform in traditional costumes and native dresses. Unlike cultural appropriation, which transforms a culturally significant artifact or practices into a meaningless pop-culture symbol, the fashion is worn with reverence to honor and celebrate the culture the dress represents. Traditional and folk costumes express a particular identity or culture, usually associated with a geographic area or a period in history. The clothing can be worn to communicate status, commemorate important events, and show unity among people. Over the years, Residents have donned a variety of folk costume, including the Agbada, a flowing wide-sleeved robe usually decorated with intricate embroidery and worn on special religious or ceremonial occasions by men in West Africa and parts of North Africa; the Hanbok, a traditional Korean garment that reflects social status and is characterized by a full skirt, vibrant colors and simple lines without pockets; and Friesische Tracht, clothing that is richly decorated with beads and embroidery and is associated with mountainous regions of German-speaking Central Europe. 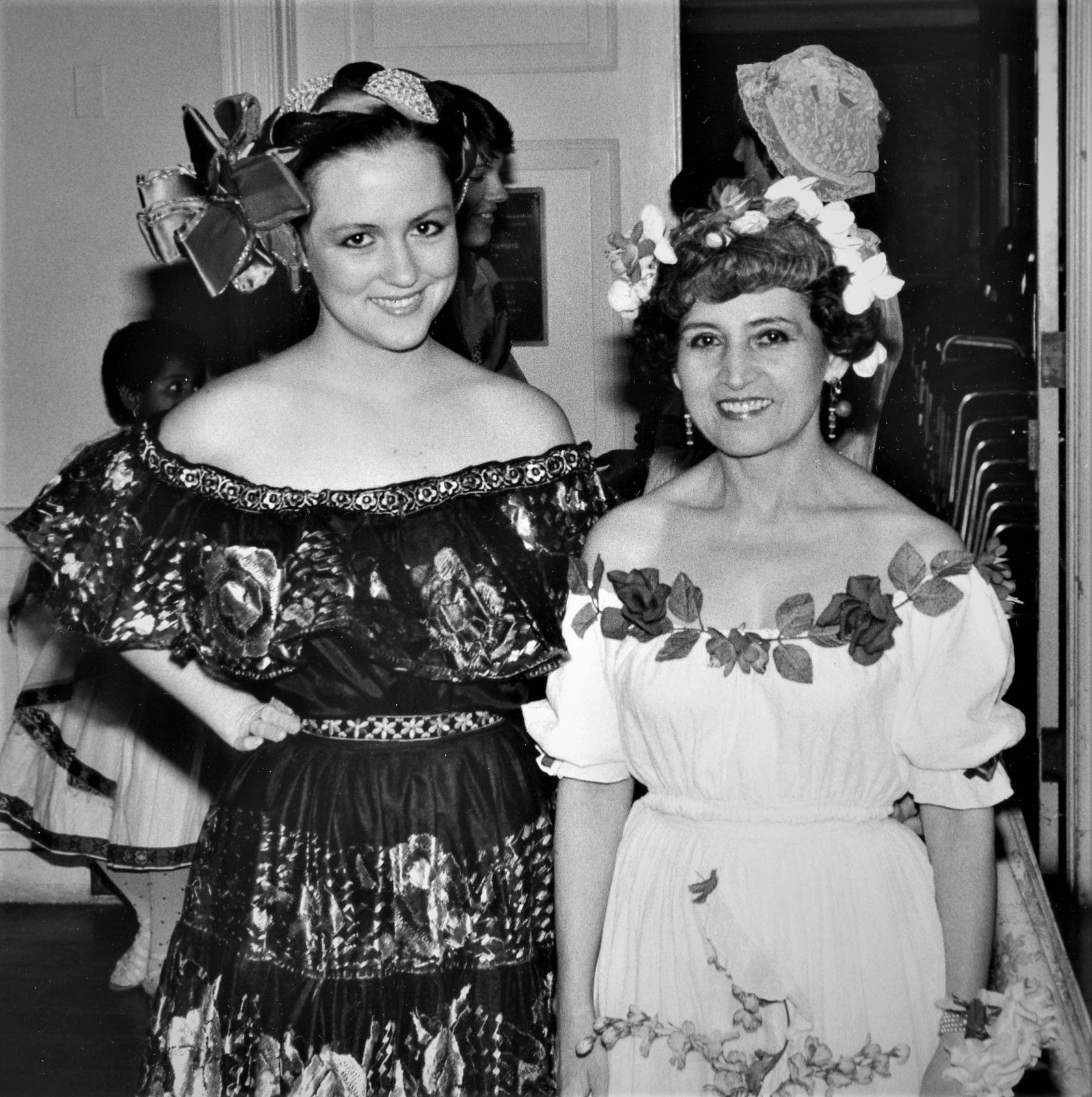 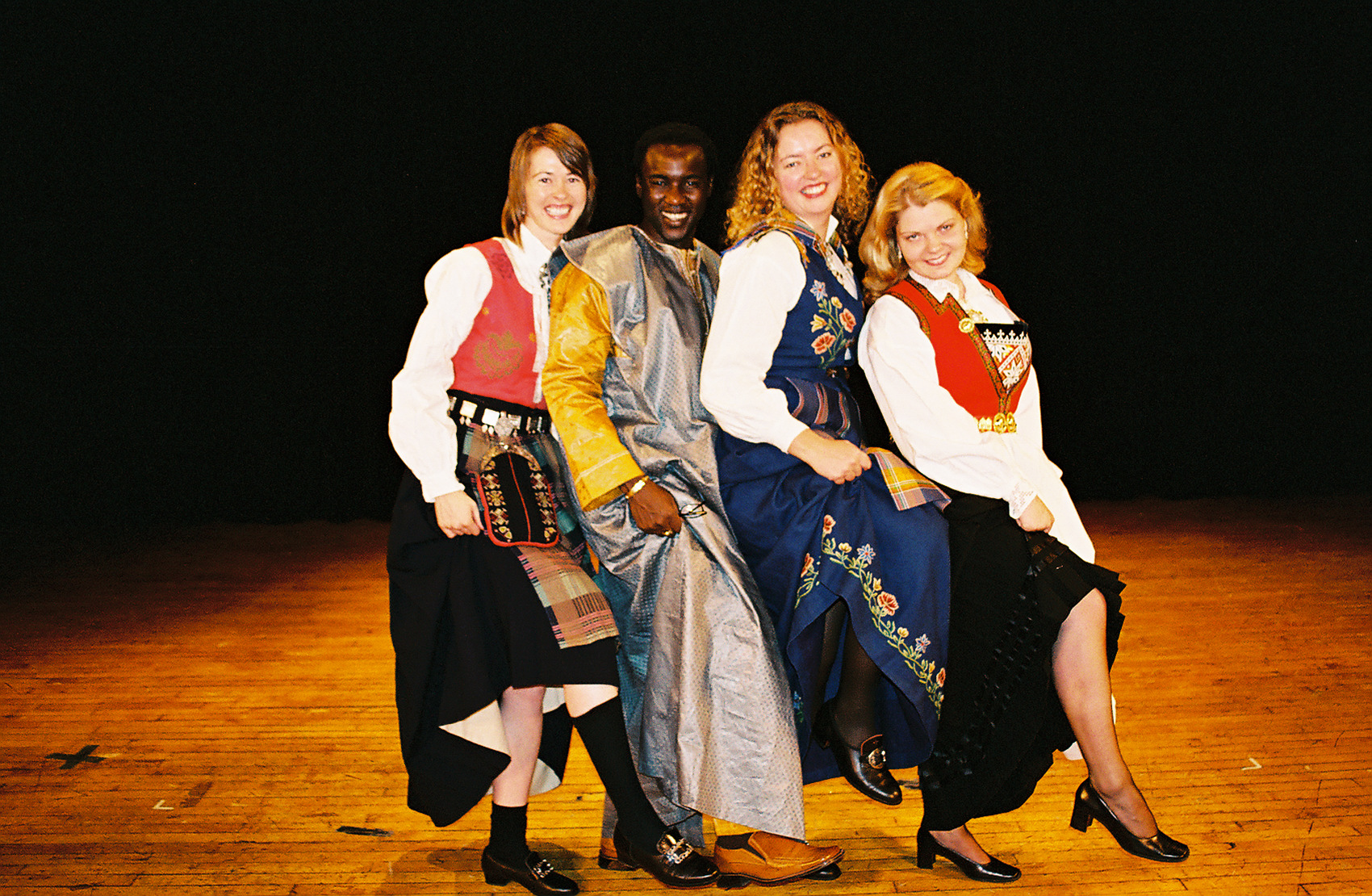 Fall Fiesta is a joyful celebration that promotes cross-cultural understanding and allows Residents to express themselves and learn about one another. The International House Archives holds extensive files that document Fall Fiesta from 1964 to the present. The collection contains a large amount of photographic material that visually captures the event’s warmth and spirit. In these photographs, Residents are featured center stage in traditional dresses and folk costumes, and HR is a familiar character found throughout. Looking at these images, the joy and excitement experienced by I-House Residents are unmistakable. I speak for all of us when I say I-House dearly misses Fall Fiesta and looks forward to celebrating again with our community when it is safe. 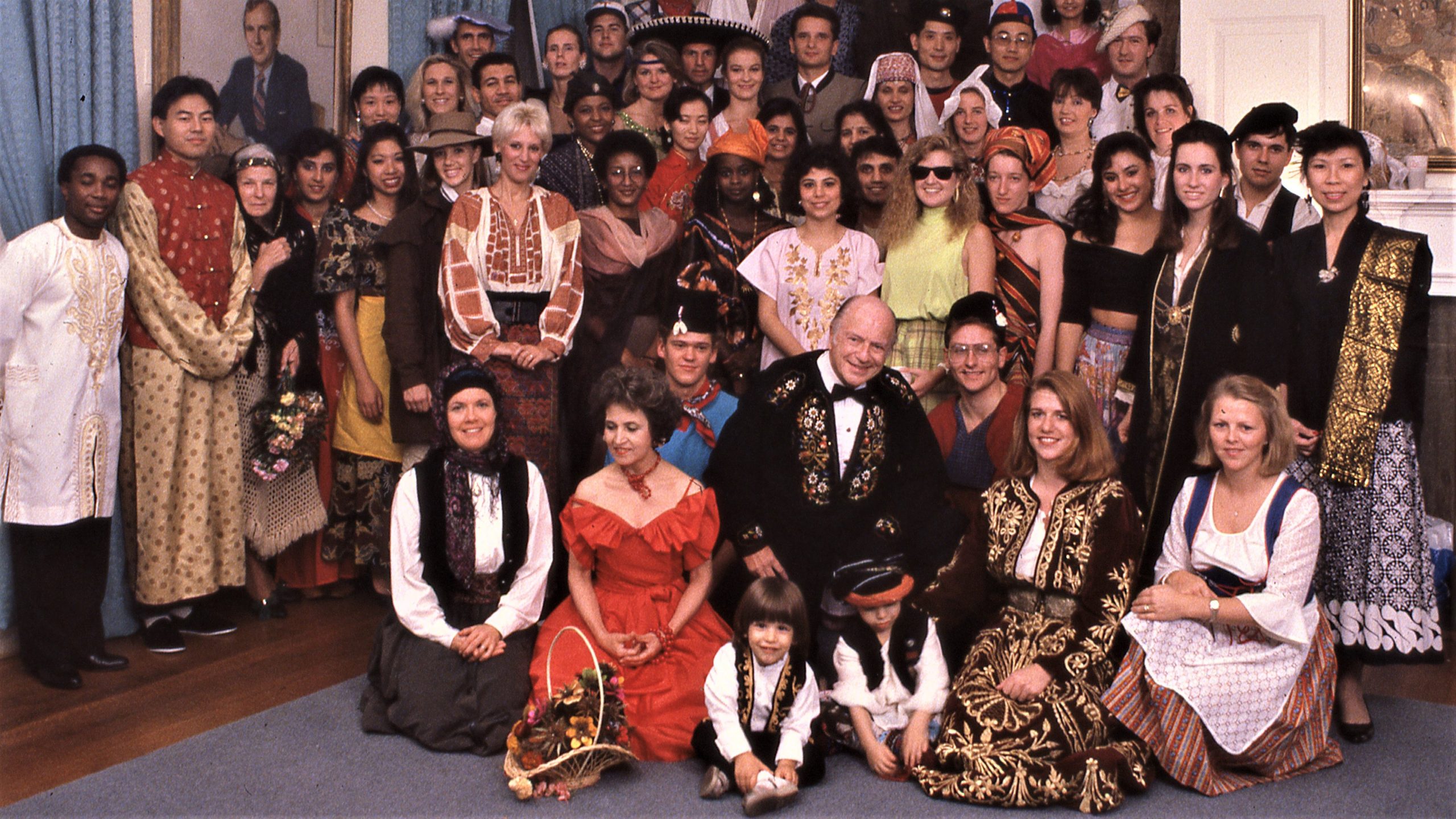