The Federal Reserve Speaks at I-House 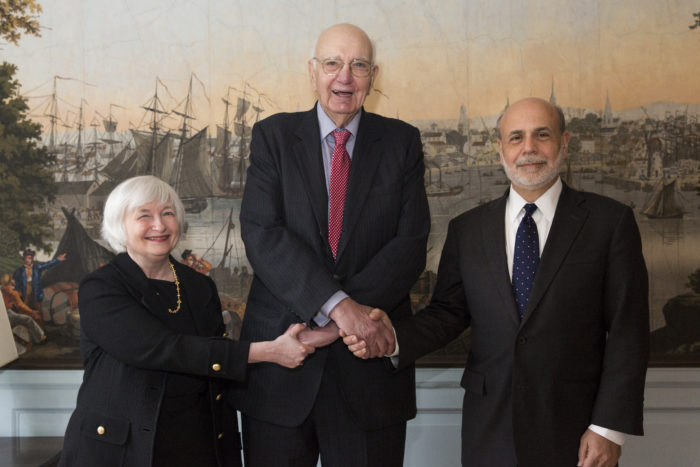 International House made history on Thursday, April 7, 2016, when, for the first time, all four living Chairs of the U.S. Federal Reserve Bank gathered together for a public discussion.

The panel was moderated by CNN international affairs expert and I-House Trustee Fareed Zakaria. The discussion ranged from the pressures faced in making difficult decisions that have global impact, to the values espoused by each Chair in doing so, to how they faced the impact of their decisions.

“What’s it like to be the Chairman? You’ve got a board, you’ve got a public, you’ve got Reserve Bank presidents…You can’t exactly do what you want without a lot of people being encouraged to agree with you. And some of them sometimes disagree. So it’s not quite so absolute…”
– Paul Volcker

I-House Residents played a special role as the exclusive audience members invited to ask questions of the panelists. “What is the Fed’s  responsibility with regards to minimizing economic turmoil in other countries?”asked Murat Bilgincan, a resident from Turkey studying Financial Journalism at Columbia University. Alan Greenspan responded,“Even though statutorily and legally we are responsible only for the monetary policy of the United States, it would be foolish to believe that we can act in an isolated manner from the rest of the world…there’s no way that can
happen, and especially in recent years where the integration globally has been so extraordinary.”

In addition to being one of the highlights of the Residents’ spring programming, this historic event also served as the launch of the Paul A. Volcker Speaker Program, a series of talks on business and economics to be held at International House. Volcker served as Chair of the Board of Trustees for I-House from 1998-2012 and continues to actively serve as an Honorary Trustee.

Proceeds from the event will support Resident scholarships that will help I-House maintain the socioeconomic and cultural diversity that is so essential to the experience it provides.