From the I-House Archives: Black History at International House 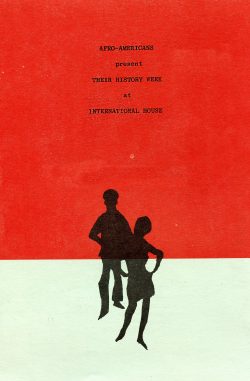 International House is extraordinarily proud to celebrate Black History Month and to reflect on how I-House has witnessed and participated in the political and sentimental upheavals of the Civil Rights Movement.

International House was founded in 1924 when Jim Crow dominated the South, and segregation and racism were commonplace. Following the Civil War, prohibitive laws in New York City enacted a culture of bigotry and discrimination that habitually intimidated and suppressed Blacks and other people of color. It was not until well after the Civil Rights Movement that the tide slowly began to shift, and New York City began to transform into the imperfectly beautiful place we love today.

During this period, to remain true to its values of welcoming all peoples, I-House has adapted through the years. An early example of how segregation affected I-House took place before the doors even opened. In his memoirs, speaking about handling a difficult board, President Howard Cook revealed that initial drawings of I-House included a swimming pool. The project was well past the planning stages, with a selected location, showers installed, and workers prepared to break ground. However, when architects informed the all-white board, drama ensued–Black and white people could not swim in the same pool! As a result, the House abandoned the plans, and the area now aptly serves as a Pub for Residents.

Outside of external sentiments, I-House has also had to contend with the prejudices held by many of its residents. In his oral history, I-House founder and president Harry Edmonds recounts the story of Tom Jones. A Resident during I-House’s first year, Jones, who was white, went to shower and encountered “the blackest Negro… he’d ever seen in his life.” Instead of showing deference or humility, the man (whose name is not recorded) greeted Jones warmly with an air of familiarity. Even though Jones was a Quaker, he was unaccustomed to sharing facilities with people of color, and this confrontation triggered a deep-rooted sense of racial superiority. To make matters worse, he recounted, the man dared to leave behind his wet towel.

Initially, Jones was in a rage and seriously questioned his decision to leave his family in Ohio to attend Teachers College at Columbia in New York. However, after reflecting further and discussing the issue with President Edmonds, Jones came to understand that this man had just as much a right, if not more, to be a resident of I-House as he did.

As time passed, Jones and this man went on to become very close friends. Such was this transformation that shortly after his time at I-House, Fisk University, a historically Black university in Nashville, Tennessee, selected Jones as their fifth president. He eventually partnered with John D. Rockefeller Jr. to consolidate fundraising efforts for all-Black colleges, and his contributions to the education of Black Americans were substantial. Rockefeller later said, “My whole investment in International House would have been worthwhile if it was only for the development of a man like Tom Jones.”

As time went on, International House’s motto, “That Brotherhood May Prevail,” was not enough to combat the daily racism and xenophobia Residents of color had to endure. In 1951, a group of students banded together to compose a letter to US Secretary of State Dean Acheson. The impassioned three-page missive outlined how the students were treated as foreigners and people of color in the United States and pointedly questioned US domestic policy concerning the treatment of non-white citizens. The Residents wrote,

“IT WOULD HAVE BEEN BETTER IF WE HAD NOT COME. PLEASE DO NOT ENCOURAGE FOREIGN STUDENTS TO COME HERE…IT IS NOT EASY TO LOVE YOU BECAUSE YOU MAKE IT THOROUGHLY DIFFICULT FOR US TO LIKE YOU IN THE FIRST PLACE.”

Acheson brought the letter to David Rockefeller’s attention, who acknowledged the truthfulness of the Residents’ claims and took the matter seriously. He wrote, “I have no doubt that more students coming to this country than we realize are disillusioned by the way they are treated and the things they see.”

The road to civil rights finally reached a fevered pitch when student activism was on the rise, and a younger generation emphatically denied the discriminatory values of its forbearers. In the 1960s, sit-ins and protests became common on college campuses, and trust and respect for institutional power reached a critical low. Adjacent to Columbia University, I-House Residents felt this unrest in profound and nuanced ways. In response to what the administration acknowledged as justified grievances, President Cook appointed a specialized long-range planning committee. The committee identified the need for action and designed fellowships to support and engage residents during this difficult time.

One of the Resident Fellows was Shirley Smith (1968–70), who initiated an inaugural week-long celebration to honor Black Americans’ legacy and their contribution to America.

The same year, future I-House President Don Cuneo launched the Harlem Tutorial Project that matched Residents with young students for weekly one on one tutoring sessions. The students received help with math, reading, and other academic needs. For the Residents, the program was an opportunity to provide direct assistance to the Harlem community and gain deeper insights into US culture.

These are just a few of many stories embedded in our archives representing the lived experiences that embody this institution. As we celebrate Black History Month this year, it is essential to remember that there is still much work to be done. Racial inequality still exists in significant quantities and in different forms. It is up to us to acknowledge this truth and act as harbingers of change. We must look back at our history and not just remember the events that happened but also the change that occurred. 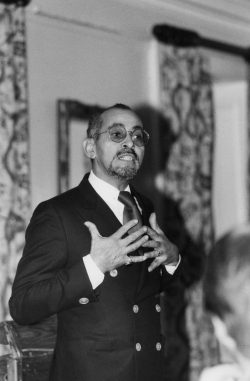 (Pictured here: Rev. Wyatt Tee Walker was an African American pastor, national civil rights leader, theologian, and cultural historian.  He was chief of staff to the Rev. Dr. Martin Luther King Jr. and a key strategist behind civil rights protests that turned the tide against racial injustice in the Jim Crow South of the 1960s.   Found in our archives, here is a photograph of Walker at I-House speaking on a forum titled “Inspirational Diplomacy” in 1984. )

(Pictured at top: Rev. Jesse Jackson is an American civil rights leader who marched with Martin Luther King Jr. in Selma, Alabama. He is also a Baptist minister and politician who twice ran for US president and was awarded the Presidential Medal of Freedom in 2000. From the archives, this is a photograph of Rev. Jackson speaking in our Main Lounge in 1985 .)