Heartfelt Goodbyes and Beginnings at the 2019 Candlelight Sunday Supper

On May 5, 2019, International House Residents and Community members gathered together at the annual Candlelight Ceremony, held during the last Sunday Supper of each academic year. During this event, candles are passed around to each member to celebrate wonderful friendships and experiences cultivated by the I-House community. The Candlelight Ceremony affirms the commitment to live up to the ideals of the House. “Passing the light” symbolizes and confirms the connection amongst all.

The reception began at 5pm in the Main Lounge, followed by a delightful dinner in Davis Hall. Michelle Lee, a member of the Resident Council and its representative for North America, was excited about the event. She said, “Sunday Supper is a cherished event that I always look forward to. It’s one of the few times where I can get together with hundreds of my fellow Residents in a homey, inviting, and intimate setting. From getting dressed up to the nines, to listening to distinguished speakers speak, to breaking bread family style, it’s truly a special event.” 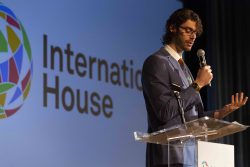 The evening program began with a welcome by the Master of Ceremonies, Marino Mugayar-Baldocchi (Brazil). As a fourth-year Resident, Marino narrated his highlights at I-House, from spending “too much time in the Dining Hall” to meeting incredible individuals and making long-lasting friendships. Next, Zupha Styer, a Resident from South Africa who lived in New Zealand, delivered blessings for the night. In tandem, as a practicing Muslim, she also prayed in honor of Ramadan, a sacred month of fasting, prayer, reflection. Afterward, Residents were enraptured by a performance by Julian Pfluggman (Germany), as he passionately played Beethoven’s Piano Sonata No.30, Op. 109 First Movement. An address by I-House Alumnus and space entrepreneur Sidney Nakahodo ’05 offered inspiration and food for thought, while the presence of an accomplished 97-year-old I-House Alumna, Rajeswari Murty ’75, who had built a school for girls in India, inspired thunderous applause. 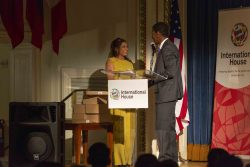 Calvin Sims, President & CEO of I-House, delivered introductory remarks and recognized several Alumni who had passed away over the course of the year. He then presented several awards on behalf of I-House. Nominated and elected by peers, I-House staff members Juan Luis Rojas and Altagracia Reyes received awards for going above and beyond in their service to the Residents. The Presidential Cup Awards went to Marino Mugayar-Baldocchi (Brazil), Luz Zamora (Venezuela), Ya’arah Pinhas (USA), Yuang “Connor” Song (China), and Rohail Khan (Pakistan). These honorary recipients were selected for their monumental contributions, effort, and dedication to the I-House community over their respective residencies at I-House.

Soon to be a proud Alumnus, Rohail reflected on this event and his general experience at I-House: “Having lived at the House for three years and been an active member of the I-House community, it was a very emotional evening for me. As always, it was a very well organized event, and the spirit of the House was truly felt through the musical performances and the traditional candle lighting ceremony at the end. I’m very grateful to have shared my home, and the highs and lows that I experienced over the past three years, with a very special group of people, Residents and Staff. Here’s to being a part of the I-House family for years to come.” 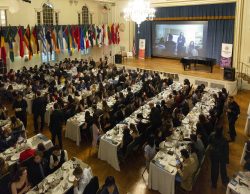 Afterward, the I-House Class of 2019 Pin Ceremony followed. Residents leaving I-House came to the stage to receive I-House Alumni pins, shaking hands with Trustees as they left. Jon Formella, an American student who had just obtained his MA and MSc in International and World History at Columbia University and was soon to leave for the London School of Economics, recalled his favorite memory of I-House:

“I did the tea ceremony with my friends Juliana, Nyi Nyi, and Linh from China, Myanmar, and Burma, respectively.We each brought different types of our favorite teas and talked about our shared joys and sorrows of student life. This was one of the chillest experiences I have ever had. We drank tea and watched the sun and clouds over the Hudson.” 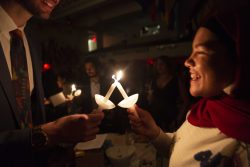 Finally, the Candlelight Ceremony, the pivotal tradition of the night, began. It was led by I-House Trustee and Womens International Leadership program Advisor Lauren States and the year’s Residents’ Council (RC) members. RC President, Apoorva Gupta (India) and the other RC members lit each other’s candles on stage before walking down offstage to light the first candle at each table. From one person to the next, Residents then lit each other’s candles. Soon the entire auditorium was ignited with lights.

Holding up their respective candles, the 200+ Residents in the room recited the International House Pledge together:

“As light begets light, so love, friendship and goodwill are passed from one another. We who have come from many nations to live in one fellowship at International House, promise one another to pass the light wherever we go.”

The pledge was translated by Residents into their respective languages as it was read.

Tianqi Guo (China), a student at Columbia University Department of East Asian Languages and Cultures, commented on this special night, saying: “It was the most touching event of the year for me. Looking around, I realized that I have made so many friends over the two years at I-House, and they have become part of who I am, along with I-house spirits!”

The ceremony marked not only goodbyes but beginnings for many. The lights that were ignited at I-House will stay lit internally with Residents whenever they go. With more than 70,000 I-House Alumni around the globe, the vibrant and global community will shine in perpetuity.

Thuy “Hangelina” Tran, who goes by “Hangie,”(pronounced “Angie”), is obtaining a Master’s in Education Policy at Teachers College, Columbia University, where she advocates for comprehensive educational opportunities for underprivileged students. Hangie was born in rural Vietnam and emigrated with her family to the US at an early age. Before coming to NYC, she was a Fulbright Scholar in Mexico and also taught English to immigrants and refugees in Atlanta, GA for more than 5 years. She speaks Vietnamese, Spanish, and English fluently. In addition to being an I-House Press Corps Fellow, she serves on the Resident Council as its Representative for East and Southeast Asia. When she’s not trying to learn a new language, you’ll see her running at the gym while grooving to hip-hop or reggaeton. Read more of Hangie’s writings on travel, decolonization, and self-care on her website.