The savory aroma of hot dumplings, fried spring rolls, and hot pot filled the decorated halls of International House as Residents in line for food made their way into Davis Hall, where lions roamed and spectacular performances awaited. On February 8, 2019, Residents and other members of the I-House community celebrated the Lunar New Year with each other, marking an exciting and auspicious beginning.

While Westerners celebrate the New Year under the solar calendar, many East Asian countries pay tribute to Lunar New Year, which is based on the traditional Chinese lunisolar calendar. The new year typically occurs in late January or early February. There are 12 Chinese zodiac animals used to represent the years, and 2019 marks the Year of the Pig. Originally observed in China as the Chinese New Year, this celebration spread to other countries and has evolved to mold their unique culture and national identity. Its variations include the Korean New Year (Seollal), Mongolian New Year (Tsagaan Sar), Tibetan New Year (Losar) and Vietnamese New Year (Tết). Additionally, overseas Chinese communities also celebrate the Lunar New Year in Singapore, Indonesia, Malaysia, Myanmar, Thailand, Cambodia, the Philippines, and other places in the world. 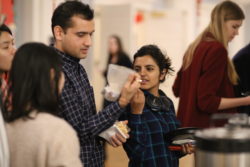 Because it is celebrated in various countries, I-House organizers and participants planned to make the Lunar New Year celebration as diverse and dynamic as possible. The event started with attendees signing in; each was given a raffle ticket for prizes to be announced at the end of the event. A line soon formed for food tasting, a combination of catering and delicious homemade dishes made by Therese Tran, Jeffrey Wang, and Jingwen Yang, who are all pursuing Actuarial Science at Columbia University. The Hall was illuminated with lanterns, an informational booth, posters, decor, and photo session stalls, giving an authentic and homey feel to Residents and other attendees. 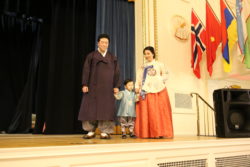 The MC, Nelson Lin, ushered everyone into Davis Hall, where he introduced the agenda and delivered comedic punchlines. Afterwards, the Columbia Lion Dance Team opened up the show with a lively lion dance accompanied by sonorous drumming. Following that was the highly anticipated traditional costume show: I-House Residents transformed into runway models as they walked across the stage and showcased traditional clothing from countries that celebrate the Lunar New Year. The heart-warming show began with a family from Korea (Ji Won Moon with his wife, Narabora Lim, and their child) wearing traditional Korean clothes. Following were Residents who showcased traditional clothing from countries that celebrate the Lunar New Year: Anastasya Toropova, from Russia, modeled a Malaysian outfit; Seoyeon Kim wore Korean traditional dress; Wenxi Lin, Julieanna Luo and Hanhan Li wore traditional Chinese dresses; Daru Dewi and her friends showcased  Indonesia attire; and Thuy Hang Tran, Brenda Khor and Therese Tran wore traditional Vietnamese dresses. The show concluded with the young children of Resident families from Syria, Chile, and the USA frolicking around the stage. 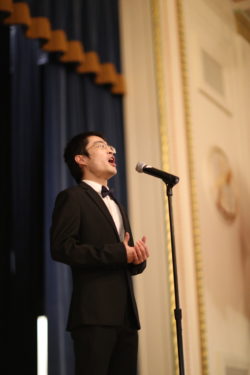 Hanhan Li and Saakshi Dulani captivated the crowd with their Indo-China fusion dance. When asked about the significance behind her performance, Hanhan said, “It meant a lot to be able to perform it with my best friend. I think it’s also a great way to explore and experience different cultures and build friendships that cross borders.” 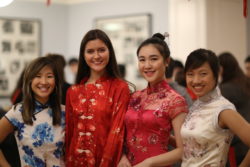 Wenxi Lin also captured the crowd with her delicate yet vigorous dance, the style of which originates from the Miao, one of China’s ethnic minority groups. There were dual performances including David Cartolano playing guitar while Mafer Vui sang “Fragrance of Rice,” and another by Sisi Liu and Wenya Poh, who sang “Confession Balloons” (Gao Bai Qi Qiu) and “Twilight” (Bu Wei Shui Er Zuo de Ge).  The program ended with the Resident Council president, Apoorva Gupta, announcing lottery ticket winners, who were given a variety of prizes including movie tickets, oriental wallets, and money in traditional red envelopes. Afterwards, Residents were invited to an after-party at the I-House Pub featuring a special Japanese guest DJ, Takaya Uchida. 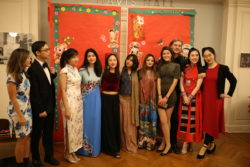 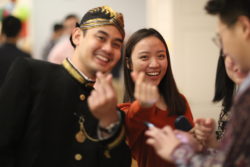 The Lunar New Year celebration was a testament to community engagement at I-House. Many Residents and attendees were amazed by how stellar the event was and thanked the team for organizing the event. Sisi Liu, who studied Classical Piano Performance at the Manhattan School of Music, said that the Lunar New Year celebration was a definitely a lovely and unforgettable experience for her. Wenxi Lin said, “I really appreciate how this festival provided the opportunities for Residents to celebrate Lunar New Year together. Thank you to the event organizers, performers, volunteers, who all came together to make the event possible. I also enjoyed the chance to perform a folk dance and do fashion show to introduce Chinese Spring Festival culture to a larger community. It was also a great opportunity for me to learn different cultures.” Vui Lin from Malaysia, a graduate student at Brooklyn College researching Mechanobiology and Genetic Engineering, commented, “I’m very impressed by the participation and most important, the fun that everyone had–that’s all that matters.” 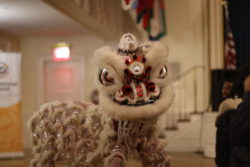 In a Facebook post, Álvaro M. Carreño, a Resident from Chile who is obtaining his Master’s in Public Administration at Columbia, gave a shoutout: “My family and I had a great time! I was happy to see different members of the community coming together to celebrate and share what’s valuable for them…and also very happy to see other families participating and being included!” The enthusiasm and appreciation reinforced an exciting and supportive beginning for both old and new Residents, navigating a new semester here in New York together.

Thuy “Hangelina” Tran, who goes by “Hangie,”(pronounced “Angie”), is obtaining a Master’s in Education Policy at Teachers College, Columbia University, where she advocates for comprehensive educational opportunities for underprivileged students. Hangie was born in rural Vietnam and emigrated with her family to the US at an early age. Before coming to NYC, she was a Fulbright Scholar in Mexico and also taught English to immigrants and refugees in Atlanta, GA for more than 5 years. She speaks Vietnamese, Spanish, and English fluently. In addition to being an I-House Press Corps Fellow, she serves on the Resident Council as its Representative for East and Southeast Asia. When she’s not trying to learn a new language, you’ll see her running at the gym while grooving to hip-hop or reggaeton. Read more of Hangie’s writings on travel, decolonization, and self-care on her website.

(All photos by Ray LC for International House)