Are we ready for the future of tech?

Are humans ready for the inevitable technological advancements that are coming in mere years? Can we, as a society, ensure the growth we see in tech remains ethical? Is there a way to correct the ills of the past to make for a better future?

These were some of the questions raised by International House Residents and others who attended the I-House “Tech Talk: Ernst & Young’s Humans Inc.” panel discussion on November 7, 2019. Hosted by Ernst & Young (EY) and presented by the I-House Programs Office, it was a night of robust discussion around the company’s “Humans Inc.” initiative and what it describes as the 5th Industrial Revolution. On the panel were Martin Fiore, US East Region Tax Managing Partner at Ernst & Young; Sharda Cherwoo, Senior Partner and Senior Advisory leader at Ernst & Young as well as an I-House Trustee; Nicolas Maitret, managing principal at SYPartners; and Swathi Chandrasekaran, an I-House Resident studying Management Science and Engineering at Columbia University.

Humans Inc. is a research initiative conducted by EY to “maximize our humanity” in the face of the rapid tech advancements we see today in hopes that it also removes the “fear of speed, change and the unknown.” And it is doing this by speaking to people all around the world, including the global group of Residents here at I-House.

From driverless cars on our roads to microchips in the human body to improve our health, or even artificial intelligence (AI) penning a best-selling book — these are all likely realities in a matter of years, according to EY’s Martin Fiore, who is spearheading the initiative.

“A lot of the time, the conversations around tech are focused on making life easier. We’re now talking about what happens to humans on that journey,” Fiore said.

It is this line of thinking that Humans Inc. is researching as we enter what Fiore has dubbed “the 5th industrial revolution.”

“All the tech from the first industrial revolution has been around us, but never inside us. Once you start putting stuff inside us to make the world a better place, what are the ramifications?” he questioned, alluding to the research around microchips in humans potentially improving a slew of ailments, including depression.

Panelist Nicholas Maitret added that it was crucial for humans to take control of tech, of the developments and the decisions being made, and not fall for the fallacy that tech was outside of our control.

“The biggest and most dangerous misconception is that it’s happening to us. But the design of tech is inherently and absolutely a human choice, and it’s within our control,” he said. “The most essential thing we can do is go back to the human purpose and take control of it.” 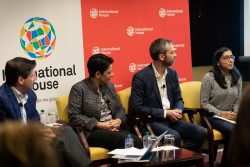 Attendees spoke of how they engaged with technology, participating in social media but also remaining skeptical. I-House Resident Chandrasekaran spoke of the dangers when there were no guardrails in place.

She recounted her horror when she requested and downloaded all the data points Facebook had on her. She noted that she was a passive user of the social media site, and yet the company had troves of data on her, 60% of which from when she was not yet an adult, but between the ages 13 and 18.

“Without guardrails, without legal ramifications, there is no way I would know, or anyone would know, if this is acceptable,” she said.

“It’s happening even today, on YouTube for instance. It’s legal to advertise on YouTube Kids, and 10 years from now, YouTube will have just so much more data on these kids.”

Many of the Residents echoed her sentiment by asking panelists of the dangers should tech, and tech companies, be allowed to grow and expand without regard of ethics. 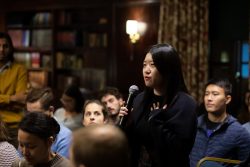 Columbia University psychological counseling student Vela Lu (China), asked if there was a way to ensure that those in lower income groups didn’t suffer at the expense of tech growth.

Divyam Nandrajog (India), a defense analyst Visiting Scholar at Columbia University, pointed out that tech could be misused when in the hands of irresponsible users which developers and tech companies need to keep in mind during the early stages of research and development.

“Who is to say an empathy chip can’t be a religious or political ideology chip? Who is to say a government won’t use it incorrectly?”

Adding to the discussion was Natalia Koulinka (Belarus), a visiting scholar at New York University’s Jordan Center for Advance Study of Russia who is also earning her PhD at the University of California, Santa Cruz. She pointed out that democracy and inequality needed to be at the forefront of discussions surrounding tech and its trajectory moving forward.

“We need to solve the problem of inequality before any talk of tech. Democracy should come first, real democracy.”

In response to some of the questions, Maitret expressed optimism that tech could self-correct so long as principles like fairness and equity are included in its design from the very beginning.

“There is a giant conversation around tech increasing the divide in society in terms of income. I am an optimist, so I think it can be designed…I don’t know if it will be, but I know it can be. Fairness can be designed, equity can be designed.”