Mobilizing Partnerships for Sustainability: In Conversation with Trustee Andy Darrell 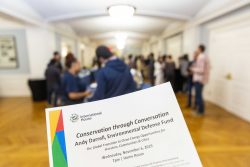 Today all over the world, the demand for a sustainable future is ubiquitous, the focus of youth movements and international conferences. Cross-sector partnerships on environmental sustainability are sweeping across the globe as diverse agencies are syncing with the finance sector. In light of the sustainability movement, on November 6, 2019, the International House “In Conversation” series featured a visit by Andy Darrell, Chief of Strategy, Global Energy & Finance at the Environmental Defense Fund and also its New York Regional Director. Darrell is a trustee of several philanthropic organizations, including International House, where he serves as the Chair of the Programs Committee and a member of the Audit Committee. Bringing years of environmental work to the table, Darrell came to discuss how private investment can impact environmental sustainability in New York and worldwide–and how the market can sustain sustainability.

Darrell began his talk by discussing major trends in urbanization. Since 2008, there are more people living in cities than in rural cities. While there are drastic improvements in technology, there is still a lack of large-scale business models to reduce the colossus energy consumption. According to Darrell, many buildings around the world are not energy-efficient. In New York City, 8,000 buildings were still burning in bunker fields that were heavy, with residual oil left over. Switching out to more energy efficient alternatives would require major capital investments. To resolve the financial impasse, he went to Wall Street to raise money so companies could afford to pay engineers and invest in greener alternative methods. 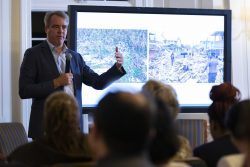 Darrell also spoke of his work as a member of New York City’s Sustainability Advisory Board and his staunch advocacy for congestion pricing to reduce car and truck emissions. Recently this year, New York Governor Andrew Cuomo, the New York State Assembly, and the New York State Senate approved a plan to implement congestion pricing for 2021, affecting areas in the NYC boroughs of Brooklyn, Queens, the Bronx, and northern Manhattan. Furthermore, it was agreed that about $500 million in annual revenue will be invested in improving transit expansion. Especially notable was how the Board succeeded in gaining approval from the politicians by engaging ordinary citizens in the process. Darrell recalled how the team went to local subways and asked riders to call their representatives to demand congestion pricing. After receiving hundreds of calls from their constituents, the politicians finally yielded. Such accomplishment underscores the power of everyday advocacy to effect policy change and investment for delivering clean energy.

Prior to his talk at I-House, Andy Darrell sat with I-House for a brief interview, which sheds further information on the intersection between private investment and the public good.

You’ve been involved in environmental projects for more than a decade. What was the impetus for your involvement?

Previously, I was a lawyer and worked on Wall Street, and I left because I wanted to bring my skills to the environmental sector. As someone who likes the outdoors and nature, I was naturally inclined to commit to sustainability. While living in New York City, I saw the potential for large-scale sustainable impact: NYC uses less energy, per capita, than any other major city. Being in NYC gave me hope for using economics to engineer the future in a sustainable way. I see the finance sector, including private investment, as a way in which capitalism and the free markets can deliver a healthy environment.

The system isn’t currently fair; rules aren’t enough to enforce regulations to mitigate climate change. Market forces can be very powerful to deliver change. I see private investment as the ultimate driver for innovations in affordable energy consumption, such as solar panels. I want to help people see that a clean, healthy future is one they can thrive on as well.

How can private investment best collaborate with non-profits, education, and government entities?
Transition to green energy will require trillions of dollars in investment. Collaboration is necessary because the government by itself will not be enough. We need further collaboration to create larger scale changes. This is not as much about private/public sector but just humans working towards a common good in general. This work requires every skill set, and we need everyone.

Find something that you love to do and orient it towards this: think green. One great example of public-private collaboration is Green Bank [a state-sponsored, specialized financial entity working with the private sector to increase investments into New York’s clean energy markets, creating a more efficient, reliable and sustainable energy system.]

Speaking of government-sponsored changes, you’ve worked for both the Bloomberg and the De Blasio administrations in New York City. What were some of the challenges and successes you’ve experienced while being a part of New York City’s Sustainability Advisory Board?

We have made significant changes. However, there was a lot of inertia in the beginning, which was expected. When the city decided to set environmental regulations, clear goals were not set. However, when economic forces converge with environmental goals, practical solutions happen. Some of the things we accomplished included the bicycle-sharing system [Citi Bike is a public-private partnership between the City of New York and Lyft Bikes, a private company],
and the clean heat program [which provided free resources to buildings to help them convert to cleaner heating fuel in the most cost-effective and efficient way]. We achieved a 65% reduction in pollution from heating. Additionally, we recently obtained approval for the congestion pricing program. We have also added more parks on the waterfront and planted more trees, as well.

You’re a staunch advocate for congestion pricing. With NYC subway and bus ridership in 2019 projected to be significantly lower, what are your strategies for linking sustainability and transportation?

The basic law for congestion pricing was adopted to be implemented at the beginning of 2021. We are in the planning phase. We need a billion dollars in investment into the transit system. Investment in transit system has led to a reduction of traffic by 20% in major cities such as London and Stockholm. For years, the decline in ridership was due to issues like reliability and timing, but the system still carries around 5 million people daily. I believe that with better infrastructure and more reliable systems, ridership will increase.

Hearing from Andy Darrell share his perspective that evening, Residents gained deeper insights into how philanthropic and private actors can work together in tangible ways to dramatically scale-up towards a more sustainable future.  Thiri Kho (Singapore), a Master’s Candidate in Global Thought at Columbia University, commented on the event, “It was a pretty interesting session on the whole, and it’s amazing to hear from someone who has made a clear impact on some of the policies that we see being implemented recently such as the congestion pricing.”

Thuy “Hangelina” Tran, who goes by “Hangie,”(pronounced “Angie”), is obtaining a Master’s in Education Policy at Teachers College, Columbia University, where she advocates for comprehensive educational opportunities for underprivileged students. In addition to being an I-House Resident Press Corps Fellow, she is currently the I-House Language Exchange Fellow and a Women’s International Leadership program Fellow who has previously served on the Resident Council as its Representative for East and Southeast Asia. Read more of Hangie’s writings on travel, decolonization, and self-care on her website.