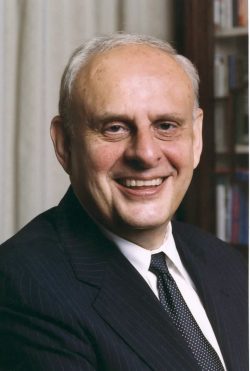 International House mourns the passing of Leslie H. Gelb, a great American diplomat, journalist, and friend. Gelb was a Pulitzer-Prize winning correspondent for The New York Times who authored a number of books, including Power Rules: How Common Sense Can Rescue American Foreign Policy and The Irony of Vietnam: The System Worked. He held various governmental positions, winning the U.S. State Department’s highest award, and became President Emeritus of the Council on Foreign Relations after serving as its president for 10 years.

I-House’s Board Chair, Ambassador Frank Wisner, said of Gelb’s passing: “The nation has lost a great patriot and a national security leader. No one in this generation thought more carefully about America’s place in the world than did Les Gelb. Over the past six decades, Les provided Americans with compelling insights into the nation’s place in the world from its power and its responsibility.” 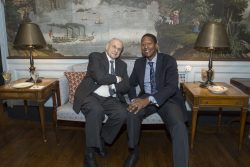 Gelb was a great friend to the International House community, sharing his vast experience in support of the House’s mission to foster international understanding among the next generations of global leaders.

Said Calvin Sims, President and CEO of International House, “I had the privilege of working with Les Gelb twice: as a young reporter at The New York Times, where he served as my mentor, and at the Council on Foreign Relations, where he awarded me the Edward R. Murrow Fellowship.” He added, “He was an extraordinary leader who invested his vast intellectual capital and experience in grooming young people for international service.” 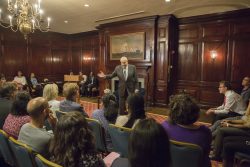 In September of 2016, I-House Residents were treated to a conversation with Gelb‎ about the changing political world map due to the rise of the Nativist, Populist and Arab Spring movements. The discussion that evening, humorously titled, “How to Exercise Power and Get Things Done Amid Global Political Mayhem,” centered on how the recent successful UK Brexit vote, Germany’s refugee crisis, and the upcoming U.S. presidential election had the potential to alter the world and U.S. foreign policy.

Of Gelb’s approach, Wisner added, “He believed America’s power must be exercised with restraint, and that the United States must readjust its policies and practices to conform to world realities. He was stern, almost didactic, in the lessons he gave, but he presented every message with humor and a sparkle in his eye.” 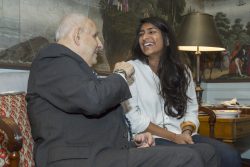 That same year, a scholarship fund was opened in Gelb’s name to support Residents in need studying Journalism and International Affairs. True to his spirit and commitment to international understanding, the students awarded by the Leslie H. Gelb Fund represented six countries: India, Chile, Saudi Arabia, Finland, and Cuba as well as the United States. At International House, we continue to honor Gelb’s memory and his legacy through our work to prepare the next generations of globally minded leaders. Contributions in his memory may be made here.