James Gorman: Letters to My Father 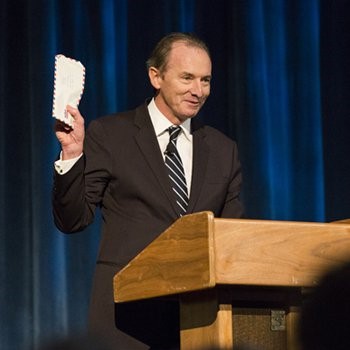 James Gorman, Chairman and CEO of Morgan Stanley, and a 1987 alumnus of International House, shared letters he sent home to his father during his first days at I-House and in the United States. Gorman cites International House as one of the key influences that led him to pursue a career in finance. Following his introduction by I-House president Calvin Sims, here are Gorman’s full remarks from his salutation at “When the Federal Reserve Speaks… The World Listens” on April 7, 2016:

Thank you Calvin. Thank you everybody, and good afternoon. It is indeed a terrific honor to be invited to participate in what is a historic event. I was very humbled to be asked to come to the stage as something of a warm-up act before you get the real deal; of course the four great chairs of the Federal Reserve. I’ve been honored to work directly with three of these four chairs, and I’ve tremendous admiration for their public service, their intellectual capacity, and their careful stewardship of monetary policy and the financial system. Each has made an outsized contribution to economic growth and stability of this great country, and to each we owe a debt of enormous gratitude.

Calvin asked me to reflect for a few short minutes on my experiences as a student at International House, a different topic. It was three decades ago, and he asked me to reflect on how it helped to develop the fortunate career I’ve been so lucky to have here in the United States of America. I was accepted to International House, very lucky to be so, and arrived here on the 7th of September, 1985, and it was a hot and humid day. I can still feel it. Like so many other foreign students who lived here, I was tremendously relieved to have such a safe and welcoming community to move to in New York City.

That week I began a tradition of writing a letter to my family in Australia, something I continued for many years after I arrived in the U.S. My father passed away several months ago. Before he did, he gave me several shoe boxes filled with my letters, each numbered and each kept in their original envelopes. For those of you in the upper decks, this is a letter with an envelope. I’ve a child in Berlin who has not in three months written the equivalent of one of these.

So I thought just very briefly I would touch on five extracts from those letters, a paragraph on each, capturing hopefully some of the essence of the life I experienced and was welcomed to in International House.

The first was arrival. I wrote:

Dear All, – by the way, that might not feel very personal, but if you had 9 siblings like I did you were not about to spell out their names every week – Well I arrived safely after 36 hours of flying via Auckland, Honolulu, and Los Angeles. The former tenant of my room is still asleep in my bed. Let’s say the changeover was finely tuned. Then again, everything is a little on the margin. My room is small, very small, but I discovered I can see the Empire State Building if I lean out my window far enough. I-House reflects New York; fantastic facilities, dirty and very security conscious.

Sunday dinner was a big event – It was in this room – Suit, tie and entertainment. The president spoke, and as he mentioned that the Australians had come from the farthest place, 11,000 miles, for what I thought was a relatively minor accomplishment we were, much to my amusement, roundly applauded.

Thereafter followed one hour of violin, piano and jazz. It was great fun. Jesse Jackson, the former U.S. Presidential Candidate, is coming to I-House this week, as is Prime Minister Gandhi and former President Gerald Ford. Where else in the world would you be so lucky as to have those people speak within one month?

And then on friends:

Tonight I studied with a Spaniard, a Filipino, and a Frenchman. It sounds like the beginning of a joke. The Yanks are incredible, loud, happy, friendly and buzzing with energy. They ask questions in class continuously, many of them needlessly. As participation is graded, I’m forced to do the same, adopting the simple rule, when in Rome, put your hand up.

I purchased a Hewlett Packard 12C calculator today for $100, and with books of $200 my finances are riding a bit of a storm.

By the way – not part of the letter – that was good practice for the financial crisis I would confront 25 years later. I was always short of money. I borrowed as a student loan, and those of you concerned about your student debts, I borrowed at 24%. Then along came Volcker.

Finally, on career – International House was highly instrumental in pointing me toward a career in banking, as this final extract will evidence:

I’ve been lucky to be assigned to a trustee as part of the student trustee link program, with each trustee matched to one student. Mine is Shelby Cullom Davis, a legendary Wall Street banker. – Indeed, Mr. Davis (and this is me speaking), a tremendous supporter of I-House and whose family name adorns the very room we’re sitting in tonight – He took me to lunch at a fancy club in Midtown New York, and at the end of the lunch he turned and pointed at me and he said, “You, son, should pursue a career in finance.”

And so I did. Thank you, International House, on behalf of myself and so many others who’ve benefited from your welcome, your warmth and your worldliness.