For any successful event, it all comes down to the guests and entertainment, but there was something about the 2020 Lunar New Year celebration at International House that was extra special.

The Lunar New Year is the biggest cultural event in Asia. In mainland China, where it is known as Spring Festival, it is marked with a week-long holiday. As with most cultural events at I-House, the celebration offered a sense of home for many, as well as a chance for Residents from different parts of the world to share in a culture that was new to them. However, this year’s event took on a new significance as the outbreak of the mysterious coronavirus (COVID-19) kept cities in China on lockdown and led to worldwide restrictions on travel at a time when people usually come together for family reunions and banquets. 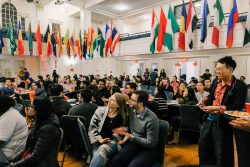 On January 24, 2020, I-House Residents and other invited quests showed up at Davis Hall to celebrate the beginning of a new year on the traditional lunar calendar. This event marked the “Year of the Rat,” the first in the 12-year-cycle of Chinese zodiac signs which are represented by different animals. People born in the Year of the Rat are believed to have characteristics associated with a rat, such as being hardworking, diligent and positive.

In keeping with the age-old tradition of New Year celebrations, Residents enjoyed a family-style dinner, considered by many to be the most important meal of the year. Then, in keeping with I-House tradition, participants were treated to musical performances by talented fellow Residents. 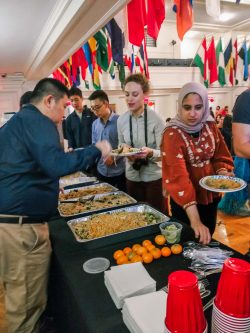 On both ends of the Davis Hall, residents queued up for a variety of Asian foods laid out on a row of tables. Hosted by the I-House Resident Council with base funding by I-House, the elaborate meal came at no cost to Residents, thanks to the groundwork laid by Louisa Ong, Southeast and East Asia representative in the Resident Council; Jingning “Jenny” Huang, I-House Resident Cultural Fellow; and volunteer Priska Marianne, a Resident from Indonesia studying Urban Planning at Columbia University. Together they rallied sponsors and shelved their initial plan of selling meal tickets. Three restaurants from the surrounding neighborhood – RaiRaiKen ramen shop, The Expat southeast Asian gastropub, and JunZi homestyle Chinese kitchen – donated most of the food, while some Residents volunteered to cook rice in the I-House communal kitchen.

After everyone had enough to eat and drink, Ong and Huang stepped onto the podium to announce the first performance – a traditional lion dance courtesy of the Lion Dance Team at Columbia University. Usually performed during the Lunar New Year and other Chinese cultural and religious celebrations, the lion dance is believed to chase away evil and bring good luck. Heavy drumming began and was joined by the sounds of cymbals and gongs; two boisterous lions appeared on the stage, dancing to the continuous rhythmic sound. Two pairs of performers wearing the lion costumes mimicked the movements of lions. Residents pulled out their smartphones, taking pictures and recording videos as the lions danced around the Hall.

“I’m Chinese, but I’ve never seen a live lion dance before,” said Huang, who is studying Piano Performance at Mannes School of Music at The New School. 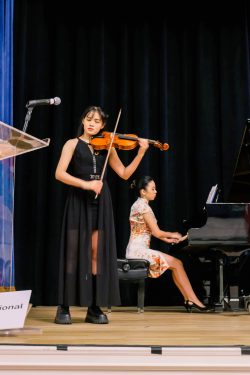 Other performances followed the lion dance. Polish American pianist Nicholas Kaponyas from the Mannes School of Music performed “Danzas Argentinas” (“Argentine Dances”) No. 1 and No. 3. Then Huang returned to the stage, but this time she sat at the piano to perform “Fisherman’s Song at Eventide” with Jessica Ruihong Chang, a violinist also from the Mannes School of Music. Then, Huang was joined by soprano Chunling Ji to perform the classic opera piece, “O Mio Babbino Caro.” I-House Resident from China, Benny Xiaobin Chen, sang a Chinese song, “Hero,” dedicating it to all the doctors, nurses and other professionals fighting to contain the coronavirus.

For many of the Residents, it was their first time participating in a Lunar New Year celebration. “It’s educational as we learn something about other cultures,” said Jon Alexander Cinman, a Resident from South Africa studying for a Master of Public Administration at the School of International and Public Affairs (SIPA) at Columbia University. Cinman had helped to cook the rice, which he said was a learning experience also because he had never prepared such a large quantity of food. “I’ve not been to such an international celebration or festival. Here at I-House, it’s unique and it’s good for us.”

“I’m grateful for the support of everyone, especially from resident volunteers, the staff, and the Programs Office,” said Ong, who is from Singapore and is a graduate student at SIPA. “Normally at this time, we would be with our families and visiting our relatives, but at least with this event, we get to be with our friends at I-House and share the festivities,” she added.

Chikezie Omeje is a Nigerian journalist studying for an MS in Data Journalism at Columbia University. He has degrees in Journalism and Mass Communication from Stellenbosch University in South Africa and Enugu State University of Science and Technology in Nigeria. Chikezie enjoys travelling and hiking; since arriving in New York he has gone to Staten Island to hike at The Greenbelt. Follow him on Twitter @KezieOmeje.