One of Michael Brun‘s fondest memories of making music is when, on a whim, he parked some cars to block off a local street in Haiti, hooked up some found speakers to his phone and other basic tech, and then begin to DJ right on the street. Making music live, on an inconspicuous street with no professional set up and no prep, so that people could come out and dance. 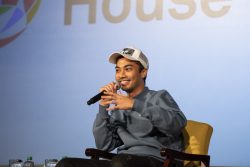 “Haitians will make a party without sound. without electricity. You don’t need any of that,” the 27-year-old DJ said during a talk at International House New York, onstage at Davis Hall.

And that is the image of Haiti that Brun is hoping to show through his music, one that is vibrant, creative and diverse, one that rightly reflects the people of his home.

“People see Haiti as being a country in need and it frustrates me. It’s not representative of what the country really is. We have so much to offer, and I wanted to flip (the narrative) and show that.

“The show is a portal into the positive and the most powerful version of Haiti.”

Brun was referring to his “Bayo” tour, which brings the flair of a Haitian block party to North America, incorporating musical styles as well as talent from Haiti. His debut album, “Lokal,” was described by Rolling Stone magazine as appealing to “young ravers” and “furthering multiple traditions simultaneously.”

Brun was immersed in music from a young age, when he started on the piano and violin at age six. He later picked up the guitar and songwriting; by the time he was a teenager, he was already mixing EDM (Electronic Dance Music) tracks.

“At 14 I was making mashups and DJ-ing parties on the weekends. My dad would come to my events with me to watch over things,” he said to the audience at I-House during an “A-Ha Moment” conversation series event in January 2020.

Initially, Brun was enrolled in medical school to become a doctor. However, that career path took a sharp detour when a song he uploaded onto SoundCloud received over 25,000 listens. He’s been a musician ever since.

“The reason I wanted to become a doctor was because I wanted to give back to my community and be involved in development projects, that’s a huge part of me.

“Then I realised music allows me to do that on a much larger scale, and in a different way.”

To date, he’s performed alongside some of EDM’s biggest names, including Maxwell, Tiesto, Calvin Harris, and the late Swedish DJ Avicii. He’s also performed at some of music’s most prestigious stages and dance festivals, including Coachella and the Electric Daisy Carnival (EDF).

“I’d say there are two sides to my career. The first four or five years, I did EDM, playing in Asia, South America. But recently I’ve started incorporating Haitian and Caribbean sounds into my music, really incorporating my heritage. And that’s how I met J Balvin.”

He was talking about Colombian Reggaeton singer J Balvin, with whom he collaborated on his 2018 single “Positivo.” The collaboration became the theme song for the Telemundo Spanish-language network coverage of the 2018 FIFA World Cup and garnered more than 12 million views on YouTube.

“It went from just a dream to actual life,” he said.

He admitted that trying to penetrate the American market wasn’t easy, but added that he always fell back on one surefire method – making music that was true to himself.

“I’m sure people connect and love Spanish songs even if they don’t speak Spanish. That’s because you feel it. It’s because of the authenticity, it’s an extension of the spirit.”

Speaking to the competitiveness of the music industry, he said, “When I realised that by being myself, people can connect with that, it took the pressure off.”

But he also spoke about the very real, and often unseen, hardships of performing in an industry that quite literally never sleeps. One I-House Resident asked how he dealt with the stress of it all, especially after Swedish DJ Avicii, whom Brun considered a mentor, died by suicide.

“The DJ lifestyle can be excessive. You never sleep, you’re playing three to four gigs a night, you can get caught up in it and forget to take care of yourself. When Avicii passed, it was a big moment for me because I looked up to him and he was one of my first mentors.

“I got to meet him and get his advice so to see that progression, how scary it all can be… you can get lost.

“Thankfully I’ve always been close to my family, I speak to them every day, I’ve had the same group of friends, it keeps me in check,” he said.

Now in this next phase of his career, he is focused on honouring his homeland and the creativity there that many may not be aware of.

“It changes the genre, but that ingenuity was something I wanted to tap into,” he explained.

On top of that, Brun spoke of his involvement in creating social impact, working closely with Artists for Peace and Justice (APJ) an education nonprofit focused on the arts based in Brun’s hometown of Port-Au-Prince.

It was the same drive for success and commitment to his roots that drew I-House President Calvin Sims to carve time out of his busy schedule to attend the event. He admitted that he was somewhat biased, seeing as his wife, Patricia Baptiste Sims, is Haitian, but nevertheless emphasized the importance of having someone like Brun share his story at I-House.

“You get to understand the richness of (Haitian) culture and the importance of the country, and the role it played in independence of the Americas. And (Haiti) has been paying the price ever since,” Sims said.

“I see this event celebrating a culture of something that has been misunderstood. It’s also an opportunity to understand Haiti and to put it in the proper context, historically and culturally.”

Said Baptiste Sims, ““I decided to bring Michael Brun to I-House in recognition of his accomplishments as a global artist and his social justice mission. He’s a natural leader, a visionary, a community builder, authentic at his core, and extremely talented.”

One topic that kept coming up throughout the night, whether through Brun’s discussion of his own experiences or from audience questions, was his tether to Haiti. He spoke about how his goals now are focused on helping the country grow.

“What we’re sharing here today is a longing to make our homeland better, and we’re seeing that play out with this extraordinary artist,” said Sims.

“It’s about social justice. That’s glorious and that’s what International House is all about.”

For I-House Resident Angie Tran (Vietnam/USA), an Education Policy student at Columbia University, it was his mission to make music while still bringing about positive social change that really stuck with her.

“It was illuminating to see a young millennial who is so passionate and so impactful, and hear about his transition from studying to be a doctor to helping people through his music. It shows that we can also make a difference in innovative ways,” she said.

Brun closed off the night with an electric 30-minute set from his “Bayo” tour, effectively turning Davis Hall into a dance party, a teaser of his upcoming show in New York, May 2020.