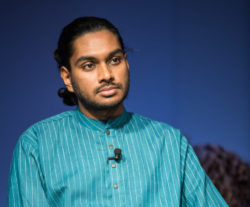 Climate change is a top issue of concern for youth making their voices heard, even as many leaders remain uncertain on whether it is real or not. Twenty-eight-year-old International House Resident Risalat Khan from Bangladesh is one of the youth making a difference. Motivated by the vulnerability of his home country to rising sea levels, Risalat has emerged at the forefront of finding solutions to this global challenge. Last year, Risalat spoke at the World Economic Forum in Davos, sharing a platform with big shots such as former Vice President of the U.S. Al Gore and Anand Mahindra, Chairman of the Mahindra Group. And as a campaigner with the global civic movement Avaaz, Risalat was part of the team that helped spearhead the largest climate marches in history before the 2015 Paris Climate Summit, with a turnout of about a million people across 2,000 cities.

Nearing the end of his Residency year at International House NY, Risalat sat down to discuss his work and experience at the House; below are excerpts.

What was your childhood like?
I’m from Dhaka City in Bangladesh, raised in a middle-class family. My childhood was safe and happy with loving and supportive parents who valued education a lot. They gave me a strong foundation. I remember my father would tell me that whatever book I started reading, I should not skip a page. He’d tell me to read from preface to the end. To him, there is a reason the book is laid out that way. I felt it was cumbersome at the time but now I appreciate it since it helped give me a strong foundation.

How did your early life shape what you currently do?
My dad is a social-environmental activist, so he raised me up knowing the need to care about social causes and think about the broader society. These values are definitely ones that I carry from my upbringing. I was also aware from an early age about the growing threat of climate change in Bangladesh. People from coastal regions and nearby rivers would get displaced by environmental hazards such as cyclones or rivers changing course. Bangladesh is a country of rivers; they look like blood vessels on the map. Those displaced would come to the city struggling to build a new life, which also caused management challenges in Dhaka. Seeing these challenges close to home shaped what I ended up studying and what I do.

Describe situations in Bangladesh that need urgent action around climate change.
Climate change is not a problem you can solve in isolation. Right now, we need to cut emissions globally very fast. Scientists say we have about a decade to slash emissions by half globally. That’s a very tall order to do, and it needs urgent action from all countries. So, for a country like Bangladesh, which is small, the numbers may not matter much to global emissions. But then everyone could say the same in a world of 200 countries. More and more climate-friendly solutions like solar and wind energy sources are becoming cheaper. These are viable solutions that every government can and must take because if they don’t, then ultimately we won’t meet the target of slashing carbon emissions. If we don’t invest in the technologies of the future, we will fall behind and lose out on the competitive edge.

What does your work entail?
I’m a campaigner with the global civic movement Avaaz, with a community of over 50 million people worldwide, that campaigns on public interest issues ranging from climate change, biodiversity, human rights, and more. Everything we do is governed by this community. We try to do the most impactful things in the world looking at the challenges we face, and collaboratively address them together.

I have been with Avaaz since 2014, and as a campaigner, I help plan and run campaigns, not on climate change alone but other issues as well, like human rights and biodiversity protection. We are working heavily right now to safeguard democratic processes around the world from disinformation and interference. Beyond Avaaz, I’m also involved with other volunteer initiatives on climate change as well. And last year, I graduated with an MPA in Environmental Science and Policy at Columbia University.

How has your stay at I-House shaped what you do?
When I first came to the City, I was very grateful to apply and get into a place like this. One of the things I missed was having a multi-cultural experience because I love meeting people from different countries, backgrounds and fields. I really enjoy this, and love conversations that I have found at I-House. I had an injury for much of the last two years and was having trouble moving around. I was on crutches for several months and I would have likely become more lonely and isolated if I were living in an apartment alone somewhere else. But having been here, it has been good to have the option of meeting people at the cafeteria. And all the events we have access to is great to have in a residential community.

Last year you attended a panel on Climate Change at Davos. What was your experience?
It was a huge privilege. I thank the World Economic Forum for making it possible to give youth space in the halls of power through the Global Shapers Community, which has a hub in New York. It is through the community that you’re able to apply to attend the Forum’s events. They select up to 50 youth to go to Davos every year. I was fortunate to be selected for the opportunity. It was quite a prominent panel, so I think it’s likely that I was in the right place at the right time. It was definitely unprecedented for me to speak at that level. I thought I’d get more nervous, but I mostly managed to keep my nerves in check. I tried to make the most out of that experience and push the boundaries and speak the truth rather than trying to mince words.

Are countries doing enough to cut emissions?
Definitely they are not. There are very many complex issues in the world, and climate is certainly one of them, but at least the metric for success is relatively simple. We just need to look at the emissions. But governments are not doing enough. That’s why you see even kids who are as young as 10 years on the streets around the world. One point four million kids marched around the world last month and it’s spreading and getting bigger. We can’t wait. On the one hand it is inspiring, but on the other, it is sad, where kids feel the moral responsibility to act as government leaders are still falling short.

Some countries are not supporting the Paris Agreement, including the U.S. that announced it would cease to participate. What’s your take on this?
For the most powerful person in the world to deny the signs of climate change, there is no term that can describe that. This is sad. The good thing is that there are States, non-state actors and businesses that say in the absence of federal leadership, they will keep pushing the boundaries and pass laws in their cities and states on climate change. They are also pushing to mobilize voters for 2020 elections so that they get an administration that acts seriously on climate change.

Are there any countries trying, as a good case study?
Yes, some countries are trying. There is something called Carbon Neutrality Coalition that has about 19 countries led by New Zealand. These countries are developing a long-term plan to achieve the aims of the Paris Agreement and cut emissions. Germany just revised their climate targets, saying they will phase out coal. But even with those, it is unlikely that the targets will hold us to the 1.5°C level of warming, which is what the latest scientific report by the Intergovernmental Panel on Climate Change (IPCC) says is needed. It says coral reefs would fall by 90% with global warming of 1.5°C, whereas virtually all would be lost with 2°C. So, we need to try our best to keep warming below 1.5°C.

What plans do you have for this coming Earth Day? Will you be participating in anything here?
For me, every day is Earth Day. We are in a climate emergency. We can all do things on Earth Day, but we need to be doing everyday actions, personal and political, to address the times we’re in.

Any future plans?
2020 is an important year — when the Paris Agreement takes effect, and a new Global Deal for Nature will be negotiated to address the biodiversity crisis. Also, it will be a milestone for the Sustainable Development Goals, with 10 years to go for the 2030 targets. These issues are all interconnected. I am dedicating myself to all of these important global fights right now, so that we can rise to the responsibility of our times.

Jevans Nyabiage Miyungu is currently a Master of Arts student at the Columbia University Graduate School of Journalism, specializing in Business and Economics reporting. He also holds degrees from the Strathmore Business School and University of Nairobi School of Journalism. Before coming to New York, he was the Business Editor with The Standard, a daily Newspaper based in Nairobi, Kenya.