On Sunday, September 30, 2018, I-House welcomed approximately 200 Residents, Alumni, Trustees and friends for Sunday Supper, one of I-House’s oldest traditions. Held three times a year in I-House’s historic Davis Hall, Sunday Suppers provide an opportunity for Residents to share a meal in an elegant setting and learn from distinguished guest speakers.

The evening’s speaker was Ambassador Norman Eisen, who shared insights from his career as an attorney, diplomat and special counsel for ethics and government reform for President Obama and discussed his new book, The Last Palace: Europe’s Turbulent Century in Five Lives and One Legendary House. Moderating the discussion was journalist and author Bruce Feiler, who writes the “This Life” column for the Sunday New York Times. 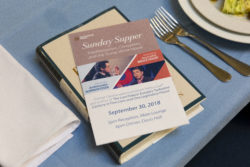 The conversation kicked off on a humorous note, with Eisen being asked to explain how he came to be known as the President Obama’s “Ethics Czar.” Eisen served from 2009 – 2011 in the White House and as the U.S. Ambassador to the Czech Republic from 2011 – 2014. After recounting some funny behind-the-scene stories of his tenure in the Obama administration, Eisen described how the experiences inspired his book, which tells the story of liberalism and illiberalism through the lives of the people who preceded him in his ambassadorial residence in Prague: its Jewish builder, Nazi occupier, post-WWII American savior, and Cold War movie star-ambassador. The discussion concluded with Eisen answering questions from the audience related to the current state of foreign policy. Every audience member received a copy of the book.

Programming for the evening also included a welcome and remarks by I-House’s President and CEO, Calvin Sims, who offered an overview of International House’s history and the tradition of Sunday Suppers. Resident students and artists provided grace and entertainment, beginning with American Helen Fentress, who served as the Master of Ceremonies, and Anca Agachi from Romania, who delivered a blessing. As per tradition, the meal was served family-style, with guests passing plates and serving one another. Musical performances consisted of a duet by pianists Yuliana Wijaya from Indonesia and Sisi Liu from China, who performed “The Serpent’s Kiss” by William Bolcom, and American cellist Wick Simmons delivering a moving solo rendering of “Khse Buon” by Chinary Ung.

Stay tuned for the next Sunday Supper, which will be held in January 2019.