Sunday Supper with The Quincy Institute for Responsible Statecraft 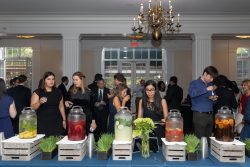 Residents arrived in a variety of formal dress – dangly earrings, floor-length gowns and short cocktail dresses, tuxedo pants, ties, an Indian with silk turban, a Nigerian in red cap – for Sunday Supper, the oldest tradition in the history of International House that began in 1909 when Harry Edmonds and his wife started inviting international students for dinner on Sundays at their home in New York.

But the Supper on September 29, 2019 wasn’t just about the delicious meal and glistening wine glasses; with special guests from The Quincy Institute for Responsible Statecraft, it was an opportunity for Residents and members of the I-House community to discuss tough questions about the role of the United States in international affairs.

“Can any of you think of an example where U.S. intervention in a regime change [to promote democracy] has been a success in the last few decades?” asked Suzanne DiMaggio, Chair of The Quincy Institute, in response to a question by an I-House Resident. 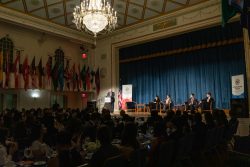 The audience in Davis Hall fell silent in response to DiMaggio’s question. Framed by the flags of a hundred countries cascading the venue, the audience of about 200 Residents, I-House staff and Trustees as well as invited quests seemed to agree with the message of the speakers that the U.S. must shift its foreign policy from militarism to diplomacy.

The panelists were DiMaggio, Trita Parsi, Stephen Wertheim, and Eli Clifton – all from the Quincy Institute for Responsible Statecraft, a new think tank based in Washington, D.C. that aims to promote diplomatic engagement and military restraint in U.S. foreign policy.

“You’ll be challenged in your thinking,” said Calvin Sims, President of I-House, in his welcome speech. He urged the Residents to take advantage of the resources at I-House that include such events and be open to invaluable lessons that would guide them for the rest of their lives. 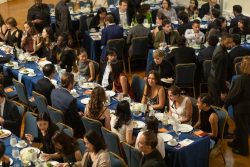 The event began with a reception at the Main Lounge and shifted to Davis Hall, where Residents and guests settled into the rows of tables set with blue tablecloths and elegant cutlery; salad and wines were already in place.

Anthony Hascheff, a Resident from the U.S., served as the evening’s Master of Ceremony; he welcomed the participants and introduced a musical performance by two Residents. Kento Campel from the U.S. and David Farrell from Australia performed “Symphony No. 6” and “Symphony No. 10” by Dmitri Shostakovich and “Allego” by Wolfang Amadeus Mozart. 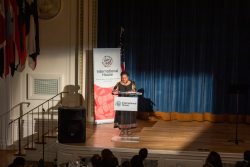 Ruth Kissam, I-House Resident from Papua New Guinea, delivered a blessing. Then, as was customary, the entrees and desserts were served family-style, to encourage sharing and conversation between the diners.

After the main meal, the speakers stepped onto the podium to discuss how American foreign policy has been driven by military dominance and why American should now rely on diplomacy.

“Afghanistan, Iraq, Syria and Libya are examples of American overreach,” said Frank Wisner, Chairman of the I-House Board of Trustees and the moderator of the panel. “Since 2001, we’ve spent some $7 trillion by one account…not to mention blood and the blood of others on whose land we intruded.”

Wisner, an International Affairs advisor and career diplomat who served as U.S. Ambassador to India, Philippines, Zambia and Egypt, said America has failed to define its interests and strategies but that the emergence of the Quincy Institute would help to provide needed analysis and thought on U.S. foreign policy.

From Iraq to Libya, the speakers pointed out how much of the foreign policy think tanks in Washington have failed to hold policymakers and commentators accountable for disastrous policies, adding that the Quincy Institute, which will be formally launched in November 2019, comes with an approach that leans on diplomacy.

Eli Clifton, an investigative journalist, now a Research Director at the Quincy Institute, said he started his career covering Washington at the time when the U.S. decided to invade Iraq, and what he had learned was that the discussion on foreign policy had been driven by a small group of people with narrow interests, as most Americans don’t feel the immediate consequences of good or bad foreign policy.

“You feel more immediate regulatory domestic issues,” Clifton said. “But foreign policy is one of those things that affect Americans deeply. Americans die in these wars, and Americans pay for these wars, because a significant portion of your tax dollars go toward these wars.” 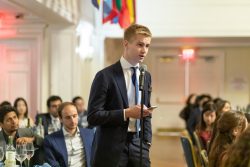 “But what exactly should the U.S. do differently that it is not currently doing in its foreign policy?” asked Knut Gjertsen from Norway, an I-House Resident studying Applied Analytics at Columbia University.

The speakers replied that the U.S. would have to reduce its military spending, which is currently more than $700 billion a year, and channel the resources to other areas. They said the U.S. strategy since the end of World War II has been military dominance, which had not really served the American interest in engaging the rest of the world. 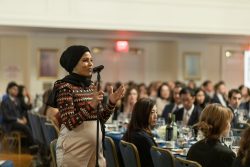 I-House Resident, Aliyah Olende, who is from South Africa and studying Negotiation and Conflict Resolution at Columbia University, asked the panelists whether they believe that American foreign intervention is genuinely motivated by the quest to promote democracy. Her question drew applause from the audience.

Trita Parsi, Executive Vice President of the Quincy Institute, remarked that while skepticism around the intentions of U.S. foreign intervention had been common outside the U.S., a lot of Americans now are also questioning the role of the U.S. in other countries.

“Through Quincy in many ways, we’ll be the voice of that skepticism,” said Parsi, who is also the founder of the Iranian American Council and an expert on US-Iranian relations. “Not in the sense that we don’t want the U.S. to be a model for other countries to follow.” Rather, he said, the U.S. should first exhaust all diplomatic options before considering military action in any country.

The panelists described The Quincy Institute for Responsible Statecraft as rooted in the principle expressed by sixth American president John Quincy Adams that America “goes not abroad in search of monsters to destroy.”

Chikezie Omeje is a Nigerian journalist studying for an MS in Data Journalism at Columbia University. He has degrees in Journalism and Mass Communication from Stellenbosch University in South Africa and Enugu State University of Science and Technology in Nigeria. Chikezie enjoys travelling and hiking; since arriving in New York he has gone to Staten Island to hike at The Greenbelt. Follow him on Twitter @KezieOmeje.