Dozens of incoming International House Residents spilled out from the Dodge Room on Monday, January 21st, fresh from their orientation, into the Main Lounge, where fellow Residents representing close to ten different groups and organizations were at the ready to introduce themselves. 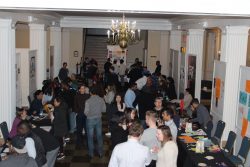 Each group had set up a booth, along with pictures, pamphlets, free gifts, and of course, sign up sheets, to help new Residents get acquainted with the many groups and activities I-House makes available for them to participate in this year. It was a smorgasbord of activity from the Cultural Salon Night booth, responsible for festivities like Diwali Night and the recent Lunar New Year celebration, to the Sports and Fitness booth, which had a full list of group workouts planned for the rest of Spring.

Other groups welcoming Resident participation included the Women’s International Leadership (WIL) program, the Resident Council, the I-House Family Group, the Ambassador Program, the Global Health and Wellness program, and the planning committee for one of I-House’s longest running and most festive events, All Nations. 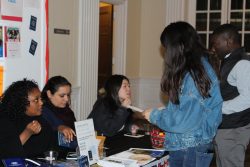 Vela Lu (China), a Psychology Counseling student at Columbia University, greeted Residents from a table right by the entrance to the Main Lounge, alongside other Resident Fellows. Equipped with free notebooks and a bowl of candy, she shared her hope that the Programs Fair would help those new to the city and to I-House find kinship amongst one another.

“I hope they find friends. There’s a sense of community here. Sometimes [new students] don’t interact much, so I hope this will help bring people together,” she said.

Also presenting at the event was Grace Wacuka (Kenya), who had fond memories of the New Resident Orientation events she attended in the Fall, when she too had just arrived at I-House.

“I met one of my closest friends at the Programs Fair,” she said. “It’s a great way to meet new people and a great way to plug in to the community and be of service.” A Theatre Acting student at Columbia University, Wacuka is now a mentor to other Residents here.

Many of the new Residents seemed to echo Wacuka’s statements as they mingled with one another while browsing through the many booths. One such Resident was Siddhartha Tripathy (India), who had only just arrived in New York City and at I-House some two weeks earlier.

“I knew to expect a lot of programs, and this event completely helped me get started, as did the orientation session,” the Columbia University Business School student said.

“I got some basic information but also additional things to have a productive and fruitful year ahead.”

He added that he was excited for the many events planned for the semester, especially the screening of “Our Time Machine” as part of the I-House Documentary Series as well as the next I-House Foreign Policy Talk, “Understanding North Korea.” That evening, he also signed up to learn a new language through the I-House Language Exchange program.

“I signed up for the language group because I’m interested in learning Mandarin. It looks exciting.”