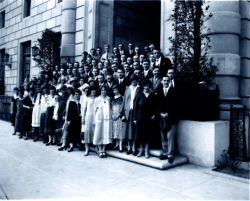 Photos, maps, artwork, letters from world leaders…these are just some of the artifacts found in the I-House storage rooms. Viewed together, they tell the story of I-House, of New York City—and of the world, by extension of the Residents who stayed here and the impact they made when they returned to their respective countries.

International House was founded in 1924 by Harry Edmonds, an official of the YMCA, with the support of the Dodge family and John D. Rockefeller. In the aftermath of World War I, countries and cultures were looking inward, and International House was created as an antidote that would instill the values of cultural openness and respect among bright and promising graduate students from around the world. To date, I-House has housed more than 65,000 individuals from 100 countries and has served as the model for subsequent International Houses across the world. In fact, the founding of I-House predates the formation of the United Nations by 21 years, with synergies continuing to exist between the two institutions over time. 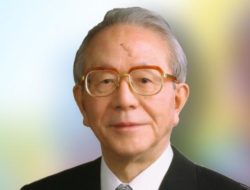 The I-House experience was designed to facilitate cross-cultural understanding and lifelong friendships through programming and leadership training grounded in values of Respect, Empathy, and Moral Courage, which the residents then carry through their respective careers, their lives, and their interactions with others. This cycle has been described by the late Tatsuro Toyoda (’58), who lived at I-House while he pursued his MBA at New York University and went on to head the Toyota Motor Company: “For each student who graduates from International House and returns to his home country, there are thousands of their fellow citizens who are also touched by their inspiration.”

Stories of the people who lived here, as well as evidence of the House’s worldwide impact, lay hidden in the archives. Thanks to a grant funded by an I-House Alumnus, I-House initiated work on its archives in 2018, which included preparing a dedicated space for document review. A committee of engaged Staff, Alumni and Trustees met with archivists and potential consultants for guidance. The House engaged The Winthrop Group to survey the collections and help create a plan to preserve and restore evidence of the vibrant I-House community over decades of history.

The initial survey and assessment revealed a treasure trove of films, photographs, and other materials in urgent need of stabilization and restoration. Evidence of flooding was discovered during this period that intensified the urgency, as water damage and subsequent mildew had destroyed some records completely. A priority was placed on stabilizing the remaining artifacts, a preliminary process that included boxing up and re-storing in the “cages” of the I-House storage space.

This was the first step of a multi-year initiative. The goal for the next phases will be to bring these wonderful records to a state where they can be shared with scholars and researchers, as well as the public, to educate future Residents on I-House traditions and values and connect Alumni with their former friends and memories of home. Stay tuned for more on this project, and how to get involved.

Above and below: images from the archives and of items currently in storage