For some I-House Residents, the Diwali celebration at International House was the very first time they participated in an Indian tradition. For others, it was a welcomed respite from the fickle New York weather and a chance to get a taste of home. Regardless of the reason, dozens of Residents filled up the Home Room on Friday, October 25th, 2019 to celebrate Diwali, the Hindu Festival of Lights, an event organised by Resident Program Fellows. 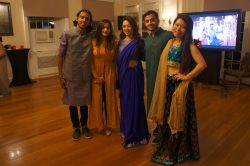 The Home Room, usually a serious venue for meetings and workshops, was adorned with orange flowers strung together and candles (electronic so as not to be a fire hazard) on each table and platform. At the front of the room, a large screen played songs from famous Bollywood films, showing large groups of people dancing rhythmically and in sync.

The night was an opportunity for Residents to meet one another, many of whom had just moved in with the start of the Fall semester in August, and also a chance for many to learn more about the celebration itself. One such person was Rachel Adeney from Australia, who had only just moved into I-House two months ago to attend Columbia University’s School of International & Public Affairs (SIPA) and was excited to immerse herself in Indian culture.

“I’ve never been to a Diwali party. I’ve heard about it but I’ve never experienced it before,” she said while gesturing to the many people with a big smile on her face.

“I’m so keen to see everything. It’s a great way to meet other people at I-House, and also everyone is dressed so nicely! It’s a really great chance to experience a culture I wouldn’t otherwise be in.”

Diwali, commonly known as the Hindu Festival of Lights, is associated with the spiritual victory of light over darkness and the triumph of good over evil. The celebration, typically in South Asia and in some Southeast Asian countries, is usually marked by a visit to the temple followed by the coming together of friends and family. As with all festivities from all cultures, food plays a central role and Diwali is no exception. 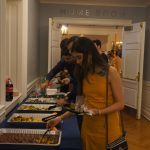 Residents heading to the Home Room were greeted by an authentic spread of Indian food in the Hall of History just outside. From naan bread and paneer (a cheese common in Indian cuisine), to the sweet dessert of gulab jamun, the food set the scene for what was to be a night of Indian cultural revelry.

At 7pm, Residents began arriving, many dressed to the nines in their colorful kurtas and sarees. Soon the venue was similar to one of the many scenes playing on the large screen at the front of the Home Room, almost as if it was straight from a Bollywood music video — full of chatter, laughter and many different colours.

An hour in, the hosts moved the tables away to make way for a Bollywood dance workshop led by 2019 Program Fellow Piyush Kuthethoor, a student at Columbia University’s Teachers Collegefrom India. Over a dozen Residents joined in to learn the fast-stepping moves often seen in popular Bollywood movies. While challenging, all the Residents thoroughly enjoyed the dances, applauding and cheering after every set.

Anna Rautenberg, a Resident from Poland also studying at Columbia University’s SIPA, even removed her high heels midway to continue dancing as the moves got incrementally more difficult.

“I like this event, it helps people connect and socialise. In that sense, it is unique to I-House and I really appreciate this. I didn’t even come for the food, I came just to celebrate with my Indian friends,” she said.

Jingning “Jenny” Huang, a classical pianist from China at the The New School/Mannes School of Music and a 2019 Program Fellow, explained how the organizers intentionally planned the event around the food, music and dance, key pillars in many Diwali celebrations.

“We wanted I-House Residents to learn about Diwali, to engage with and understand more about the Indian culture, and to have a fun Friday night with their friends at I-House at the same time.”

Once Residents were confident with their newly-learned dance moves, the party adjourned to The Pub, where a DJ spun popular South Asian tunes to a packed room.