International House took a big step forward on March 12, 2021 with the first in-person speaker program held “Live from Davis Hall” since the start of the global pandemic one year ago.

“Seeking Common Ground: The Future of U.S./China Relations” offered an in-depth discussion – the first of a four-part series – with China experts Elizabeth Economy of Sanford University’s Hoover Institution and Daniel Russel of the Asia Society Policy Institute, who discussed the relationship between the world’s two great superpowers.

Watch the recording here and below.

Fifteen socially-distanced I-House Residents attended the event in Davis Hall and participated in a lively Q&A with the speakers, watched by hundreds of Alumni, friends and others as the event was streamed live around the world.

Wisner noted that, 52 days into the Biden administration, China is the single most important challenge facing American foreign policy. While great importance will be given to the relationship with China, he said President Biden has made it clear that the U.S. “was not going to pursue a cold war, nor the fruitless objective of American hegemony in the Asia Pacific area.”

Economy, who also serves as a senior fellow for China studies at the Council on Foreign Relations, said the U.S./China relationship is in one of its most difficult periods. The prior framework of engagement, in which the U.S. sought to draw China into a rules-based international system, was upended by the ascension of Xi Jinping in 2012 and is becoming intensely competitive and confrontational.

President Xi seeks to reclaim a degree of centrality for China

on the global stage, Economy said, pushing the U.S. out as the pre-eminent power of the Asia-Pacific region while reclaiming territories considered sovereign and engaging in border disputes.

Economy said that China wants its own political, security and economic interests to be embedded in other countries through its Belt and Road initiative and seeks to reform the norms and values of global governance institutions like the United Nations to align more closely with its own.

“There are very few areas where the U.S. and China have a true coincidence of interests, “said Economy. “But they are largely in a competitive space, where what the U.S desires and what China desires are fundamentally at odds” with respect to issues including human rights, internet governance, and the relationship between the state and society.

Russel, former U.S. Assistant Secretary of State for East Asian and Pacific Affairs, likewise presented a sobering appraisal of the relationship, describing it as “extreme distress,” with China in a relative position of strength having had formidable successes in its handling of COVID, while the U.S. experienced disheartening failures in 2020. 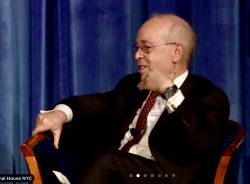 He described President Biden’s Quad summit earlier in the day with fellow leaders of Japan, India and Australia as a graphic demonstration of the U.S. seeking to contend with China not in isolation, but in concert with other like-minded countries.

“The ideas of traditions, of moderation, compromise and engagement, have largely been discredited, said Russel. “There’s a predisposition on both sides to assume the worst, and to embark on worst-case planning. In the bi-lateral relationship, cynicism is no better than naivete.”

As the Biden administration gives priority to addressing domestic concerns including the pandemic, infrastructure and social divisions, Russel said it could be that China is looking for calm and stability in the next few years. “It may be we see a slow period of feeling each other out, of jockeying for position, of competing but not negotiating, or at least not negotiating in a full way.”

In a Q&A with I-House Residents in Davis Hall, as well as those engaging via social media from I-House North and alumni from around the globe, topics included the recent EU-China Comprehensive Agreement on Investment, China’s treatment of Muslim minorities, the influence of China at the United Nations in recent years, and China’s internal concerns about possible climate disruption. 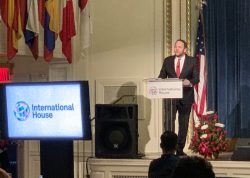 Earlier, Interim President Brian Polovoy opened the evening by noting its significance for bringing residents together again, in Davis Hall.

“We’re doing it safely, but we’re doing it together,” said Polovoy. “I-House has always been about bringing people together. No doubt the experience of today’s residents is very different than the experience our alumni had, but at its core, in a very real sense, it is the same.”

Ambassador Wisner thanked Polovoy and the I-House team for initiating the event and reminding everyone that “I-House carries on despite the exigencies of the period of COVID-19.”