“The Great Betrayal”: David L. Phillips on the US & the Kurds 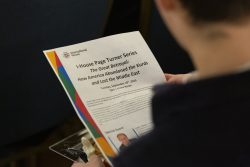 On Tuesday, September 10, 2019, the first International House Page Turner Series event began, featuring an insightful dialogue with David L. Phillips, author of The Great Betrayal: How America Abandoned the Kurds and Lost the Middle East. Dr. Phillips is the current director of the Program on Peacebuilding and Rights at Columbia University. He has more than 25 years of experience working on peace-building, having served as a senior advisor to the UN Office for the Coordination of Humanitarian Affairs and as a U.S. Senior Adviser and Foreign Affairs expert during the presidential administrations of Bill Clinton, George Bush, and Barack Obama. In his introduction, Calvin Sims, I-House President and CEO, shared that they have known each other for over 20 years, having met through a fellowship.

The Great Betrayal covers the political and diplomatic history of the Kurds and their international relations from the 1920s to the present. Speaking about his inspiration for writing the book, Dr. Phillips said he was “dedicated to breaking the cycle of betrayal and abuse that has afflicted the Kurdish people.”

Who are the Kurds? The Residents in attendance that evening had various levels of familiarity and understanding of the issues. The Kurds are the world’s largest stateless ethnic group, an estimate of more than 35 million people. They are generally spread across the fringes of four nations: Turkey, Iran, Iraq, and Syria. They are united through their language and identified as a distinct ethnic group of people in the Middle East who are neither Arab nor Persian. Not all are Sunni Muslims, as is the general perception. Far from being homogeneous, they are made up of many tribes who speak different dialects.

Dr. Phillips began by describing his admiration and love for the Kurds. His book is primarily based on first-hand interviews, and his engagement with them has exposed him to their friendliness and sincerity. He recalled a research trip in which he spoke to Kurdish victims of chemical destruction; after he returned to the U.S., one of his subjects sent him a package that contained a traditional Kurdish outfit.

Dr. Phillips emphasized that despite their loyalty, the Kurds have been abandoned by the U.S. on three occasions. The first betrayal occurred after World War I. The Treaty of Sèvres dissolved the Ottoman Empire and the Allies promised to make Kurdistan autonomous through a promised referendum and self-determination. However, this was nullified by the Treaty of Lausanne three years later, denying the Kurds a potential state of their own.

The second betrayal was the 1975 Algiers Agreement which ended the Kurdish rebellion. The agreement was signed between Iran and Iraq, with U.S. Secretary of State Henry Kissinger agreeing that it was a necessary political move. Although the nationalist Kurdish leader Mustafa Barzani urged America to step in as a guarantor for Kurdish independence, the U.S. ended its support, leaving the rebellion to be brutally crushed. Dr. Phillips pointed to the dark irony of the U.S.’s non-intervention policy, revealing that the chemical weapons that destroyed the Kurds were sold to Iraq by U.S. companies.

The last betrayal was the 2017 independence referendum in the Kurdistan Autonomous Region (KRG). The preliminary results, although claimed by opposition as non-binding, showed approximately 93.25 percent of votes cast in favor of Kurdish independence. The referendum led to a military conflict with the Iraqi government. Consequently, the KRG lost 40 percent of its territory and its main source of revenue, the Kirkuk oil fields. Dr. Phillips argued that the U.S. should have backed the referendum and intervened to stop Iraq from taking military action.

Additionally, the Kurds have been targeted by ISIS because they are viewed as pro-American. While they were key partners for the U.S. in the fight against ISIS, the U.S. did not help in return. So far, ISIS has seized 80% of their city, killing Kurdish civilians. He said that there was “no strategic value” for the U.S. to help the Kurds, emphasizing that the U.S. has supported the “One Iraq Policy” since the 1990s. According to him, the U.S. has always put its interests first, “we are not interested in alliances.” Thus the Kurds were collateral damage. Dr. Philips ended his talk by recalling a Kurdish adage, “Kurds have no friends except for the mountains.” Going over the historical and political wrongs, he pressed the audience to think about the politics of (a)morality.

I-House Residents were receptive to the information and intrigued by the talk. Mya Jaradat (USA), who is pursuing her Master’s degree in Journalism at Columbia University, admitted that she didn’t know much about the Kurds and their struggles before. Having gained new insights on the Middle East conflict, she said, “I have a better understanding of their situation and want to know more.” Another Resident, Carolina Tamayo (Colombia), who is studying International Affairs at SIPA, Columbia University, commented, “I really enjoyed the event because it was an opportunity to learn about different perspectives on a particular matter.” Both agreed that thought-provoking I-House events like this evening allow for Residents to learn more about and reflect on world events, nurturing a greater variety in discussions with their peers.

Thuy Hang Tran, who goes by “Hangie,”(pronounced “Angie”), is obtaining a Master’s in Education Policy at Teachers College, Columbia University, where she advocates for comprehensive educational opportunities for underprivileged students. In addition to being an I-House Press Corps Fellow, she is currently the I-House Language Exchange Fellow and has previously served on the Resident Council as its Representative for East and Southeast Asia. Read more of Hangie’s writings on travel, decolonization, and self-care on her website.