On Friday, September 20, 2019, International House welcomed landscape photographer Pablo López Luz to discuss his photography and the power of art to create social change. López Luz graduated from NYU, holding an MA in Art. His work has been exhibited in numerous group exhibitions and solo shows in international museums. 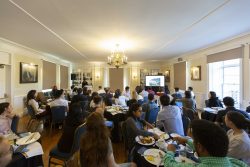 The event took place over a buffet  brunch in the Home Room. The round tables in the room quickly became filled with Residents, many of whom work and study in other disciplines but were curious about photography.

López Luz began the conversation with a presentation of his work. His best known project, Terrazo, features the vast urban landscape of Mexico City, seen in a new light from tall hills and helicopters. López Luz spoke about the themes of these photographs — the ecological impact of the landscape, economic disparities, and the human struggle for survival.

One recent project, Frontera, explores the landscape of the Mexico–US border. A serpentine black line runs across the slopes of the terrain, like a scar in the topography. His aerial shots are often unpeopled, offering no indication of who “belongs” on either side of the border. Through these photographs, López Luz seems to reinterpret the very notion of a border, stripping it of politics to the physicality of the landscape itself.

After his presentation, López Luz answered questions from I-House Residents about his work and career. Ray LC, an MFA candidate at The New School/Parsons who curated an exhibition at I-House over the summer entitled, “Art for Social Impact,” asked López Luz how he raised visibility for his work early on in his career. In response, López Luz spoke of the professional connections he made through chance meetings at galleries and word-of-mouth from the curator community. Most importantly, he said, he was always on the ground, pursuing opportunities for his work to be seen and “knocking on doors from city to city.” 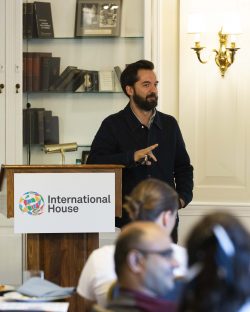 Also during the Q&A, López Luz discussed the advent of drone photography, the effect of curation on a viewer’s interpretation, how people construct a national narrative, and how this has been leading to a loss of identity in Mexican cities.

This event was a part of the I-House “In Conversation” Program series, which invites notable speakers across various professional disciplines to visit and share their insights with Residents in an intimate setting.

Kevin Wang is pursuing his MFA in Creative Writing at Columbia University’s School of the Arts, with a specialization in Nonfiction and Translation. He received his BA in English at Skidmore College and has held a variety of teaching, tutoring, and editorial positions.  Read more of his work at kwrite.org.